Electrical energy technologies that store energy generated by renewable sources like wind turbines and solar panels are expected to play significant roles in the future. There are many available storage systems that have been proposed for renewable energy applications, such as pumped hydro, compressed air and electrochemical batteries. Among these various energy storage technologies, the batteries are one of the most promising systems because of flexibility, high energy efficiency and simple maintenance [1]. Recently, the idea of liquid metal batteries (LMBs) was revived at MIT (Massachusetts Institute of Technology) in USA [2]. LMBs seem promising candidates for large scale energy storage systems since they can meet the needed requirements such as long cycle life, high power and low cost [2]. LMBs consists of three liquid layers, an alkali or alkali-earth metal as negative electrode on the top, another molten metal as positive electrode at the bottom, separated by an electrolyte which is often a molten alkali halide mixture. The system self-stratify based on density differences and immiscibility. During discharge, the molten metal of the anode is oxidized and cations are conducted through the molten salt electrolyte being reduced at the cathode forming a liquid metal alloy. The operating temperature for LMBs is typically very high ranging from 450 °C to 700 °C, depending on the selected electrode couples and electrolytes [2,6,7].

In the recent years ionic liquids (ILs) have attracted remarkable and growing interest due to their appealing properties such as thermal and electrochemical stabilities, low vapor pressures, and wide potential windows [2]. ILs are used as electrolytes in different electrochemical devices such as batteries, supercapacitors and redox flow batteries [3,4].

In this work we investigate the feasibility of replacing high melting temperature halides salts with ILs as electrolytes in LMBs. The development of a low temperature system will facilitate an investigation of convection in LMBs by Ultrasound Doppler Velocimetry (UDV). This technique needs a direct contact to the liquid or at least the cell wall and relies on relatively low temperatures (< 230 °C) to keep the piezoelectric transducer intact. A mixed ionic liquid of 20 mole% sodium-bis(trifluoromethylsulfonyl)imide (Na[TFSI]) in tetraethylammonium-bis(trifluoromethylsulfonyl) imide ([TEA] [TFSI]) was selected as electrolyte for our experiments based on its good electrochemical stability and the low reactivity with molten sodium below 200 °C [5].

A general problem with LMBs based on Na as negative electrode and molten alkali halides as electrolytes is their high self-discharge due to the solubility of Na in its halide salt melts [6]. With greatly decreasing the operating temperature of the Na anode based systems by using ILs, coupled with a low melting cathode metal one would be also able to overcome this drawback.

The LMB comprising a Na negative electrode, 20 mole% sodium-bis(trifluoromethylsulfonyl)imide (Na[TFSI]) in tetraethylammonium-bis(trifluoromethylsulfonyl) imide ([TEA][TFSI]) electrolyte and a Pb-Bi negative electrode was assembled in the fully charged state in an aluminum nitride tube with an active surface area of 0.68 cm2 and then placed into a cylindrical glass vessel. Tungsten wires were used as negative and positive current collectors and the interelectrode distance was fixed to 0.5 cm. All experiments were performed inside an Ar filled glove box, model OMNI-LAB from Vacuum-Atmospheres, (O2 < 0.2 ppm, H2O < 0.5 ppm) and the cells were operated at 160 °C. The heating of the cells was achieved with a coil made of thermoresistive elements and which was fixed around the glass tube. The temperature was controlled and measured with the help of a thermocouple. The molten cell components will self-segregate into three distinct layers based on their immiscibility and density differences (0.968 g cm-3 for Na, 1.4 g cm-3 for IL and 10.453 g cm-3 for Pb-Bi eutectic). The theoretical capacity of the cells was estimated at 130 mAh at a fully discharged target composition of 15 mole% Na in the Pb-Bi eutectic. The experimental setup used to perform the experiments is depicted in Figure 1. 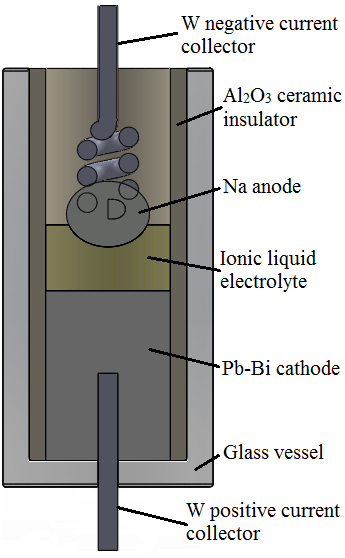 Galvanostatic cycling with potential limitation and electrochemical impedance spectroscopy (EIS) techniques were employed to characterize the cells, using a two-electrode setup with Na metal serving as the counter/reference electrode and the Pb-Bi eutectic as the working electrode. The impedance spectra were acquired in the frequency range from 100 kHz to 10 mHz at 5 points per hertz decade with an AC voltage amplitude of ± 10 mV. A Biologic potentiostat model SP300 was used for the electrochemical characterizations.

In order to evaluate the moisture content within ionic liquids electrolyte experiments were conducted using a Karl Fischer titration device (model 831 KF from Metrohm) fitted with a lab made container for solid samples measurements. Typically values of 15 ppm water content were obtained from the average of three consecutive measurements.

The batteries were cycled at 8 mA cm-2, which corresponds to C/26 rate for a predefined time. The discharge cut-off limit was set at 0.15 V. We were able to run the cell for three charge-discharge cycles at about 50% depth of discharge (only for the first cycle) after which the system ceased to operate (Figure 2). After cooling down and opening the cell we noticed the presence of dark products covering the negative electrode at the electrolyte interface (Figure 3). Our assumption is that this is a result of the Na electrolyte interaction enhanced by the presence of water traces in the IL. 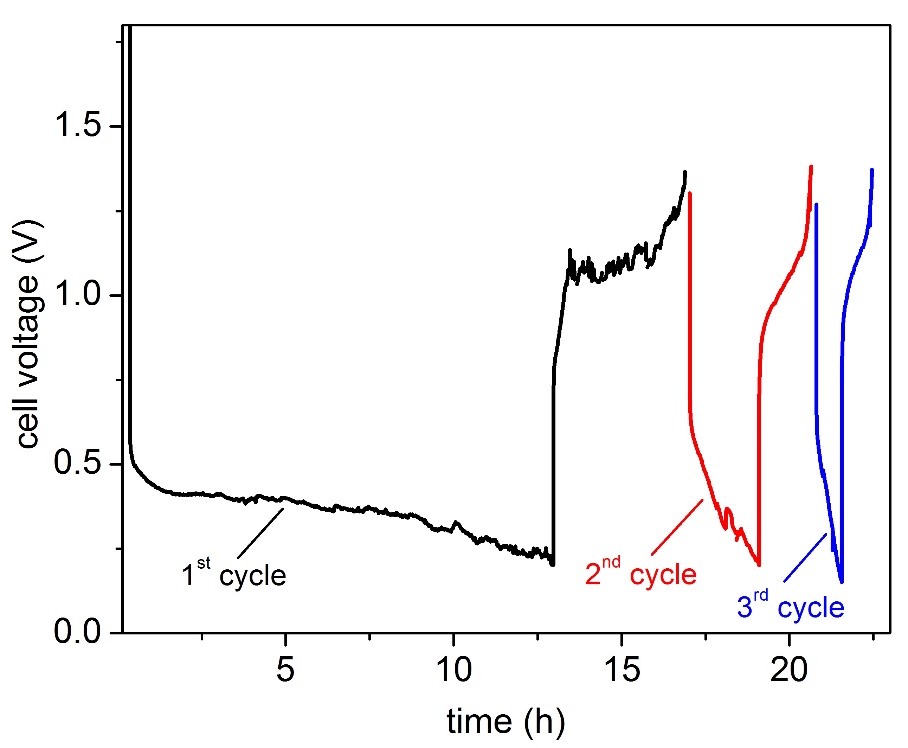 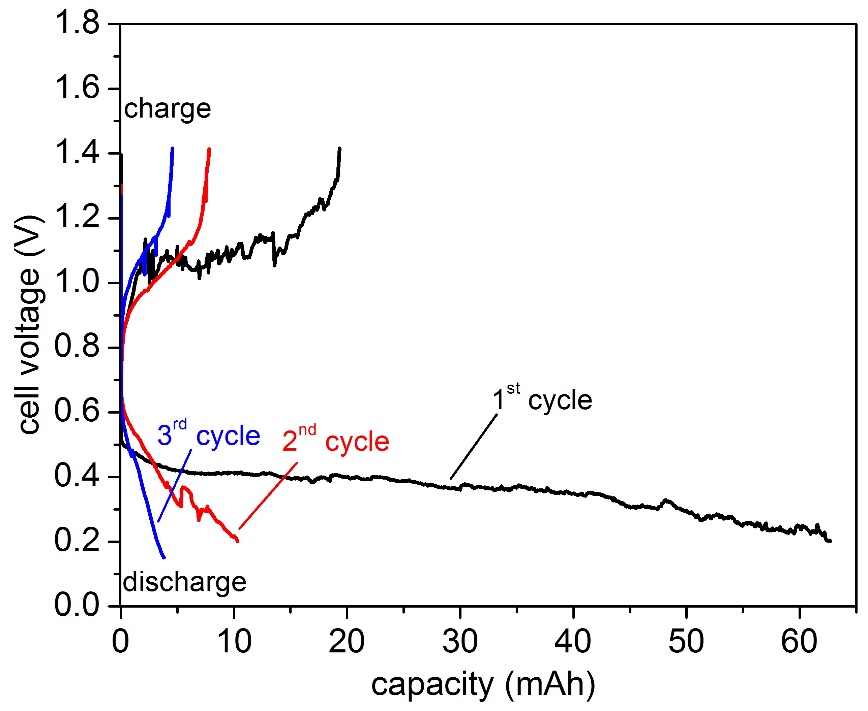 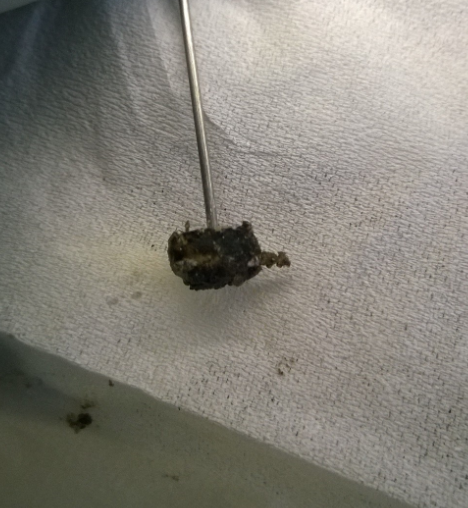 Even very low amounts of moisture in the electrolyte (about 20 ppm) can be detrimental for the stability of the system, causing rapid formation of oxides on the molten Na surface. These films will act as resistance component for the electrochemical reaction thus the resulting high overpotential can lead to decomposition of the IL. Thus the very high OCP value of the system in the initial state of about 2.4 V can be assigned to the oxide layer formation on the Na electrode surface. Further investigations are under way to understand the mechanism behind this interaction.

Post mortem examination of the Pb-Bi positive electrode revealed a fine grained solid phase formed at the cathode-electrolyte interface during the cycling experiments floating at the surface of Pb-Bi cathode. The formation of this intermetallic is eventually completely blocking the electrode interface causing the failure of the system, although we could not see very clearly the sharp decrease in the potential which was reported for the Na-Bi system [7,8]. This might be due to the fact that we cycled the cells only at a maximum discharge depth of 50% and the solid phase was only partially covering the cathode after the first cycle and then develops further with the next charge-discharge cycles. Therefore, as reported in the literature [7,8] we must maintain an all-liquid system in order to optimally operate the cells.

Based on the data from impedance spectroscopy we estimated the electrical conductivity of our electrolyte from the resistance at high frequency region at 34 mS cm-1 which is in good agreement with the data reported by Ueda et al. [5]. From the Nyquist plots presented in Figure 4 we can estimate that the ohmic potential drop coupled with charge-transfer overpotential, to be the predominant loss mechanisms in our system. Furthermore, at lower EIS frequencies the increased cell impedance might indicate a Warburg behavior suggesting that the electrochemical reactions are diffusion controlled [9]. Therefore a mass transport limitation of sodium cations into and from the Pb-Bi positive electrode can occur thus influencing the cell performances. This clearly shows the need to enhance mass transport in this low temperature LMB and once more makes clear the motivation for measurements of the flow field inside the cell. This will be the subject of future work. 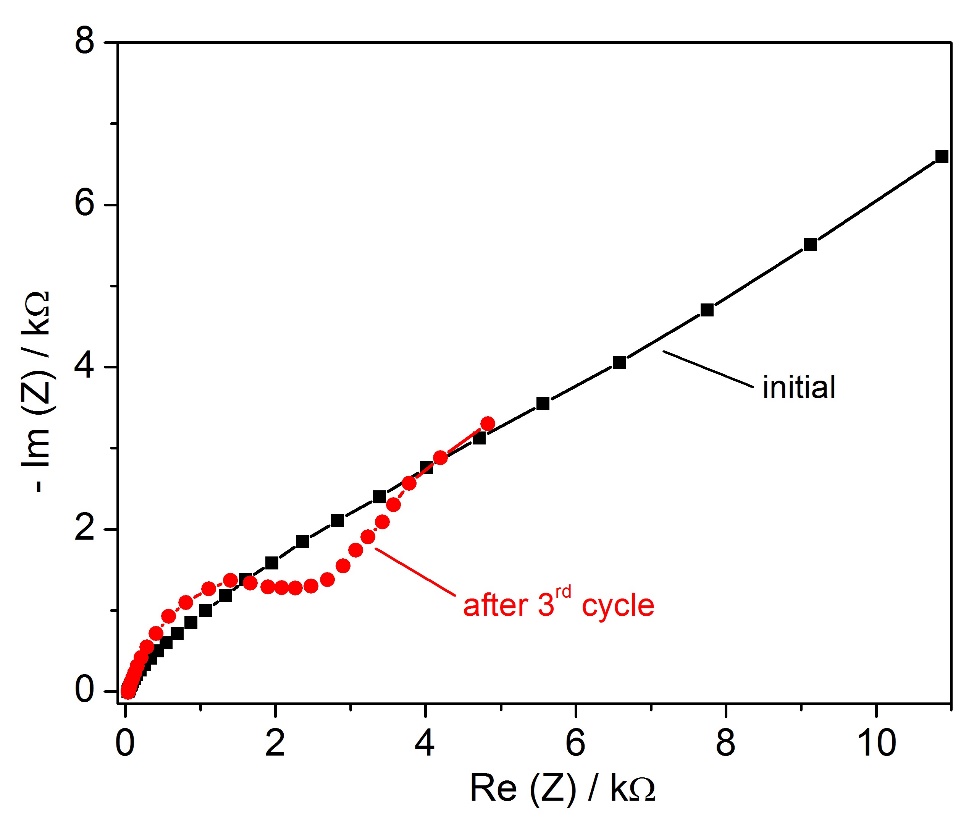 A low temperature liquid metal battery based on an ionic liquid electrolyte (20 mole% Na [TFSI] in [TEA][TFSI]) was constructed and operated at 160 °C. Such a low temperature system represents a valuable model for fluid flow measurements in multilayer systems. The preliminary investigations of the system showed promising results. Galvanostatic charge-discharge experiments were performed at 8 mA cm-2 for a predefined time of 13 h, achieving a discharged capacity of 63 mAh on the first cycle which correspond to about 50% depth of discharge. The cells ceased to operate after three charge-discharge cycle due to a combined effect of the formation of a solid phase on both electrodes thus hindering the electrochemical reactions.

Further investigations are needed in order to stabilize the system and enhance the cyclability of the cells.

This work was supported by Helmholtz-Gemeinschaft Deutscher Forschungszentren (HGF) in frame of the Helmholtz Alliance LIMTECH.