Many investigations have dealt with ways of increasing electro-catalytic activity of cathodes for the hydrogen evolution reaction (HER) in alkaline solutions. Research has been mostly focused on several areas of interest such as electrode composition and surface morphology to enhance activity and durability of electrode. Ni-based alloys exhibit a good electro-catalytic activity for hydrogen evolution in alkaline media [24-26], even though the high efficiency and durability of the electrode still required.

In the present work, the effect of magnetic field on current efficiency, morphology and crystal orientation of NiCo alloys when using direct or pulsed current is extensively studied. The investigation of electrocatalytic activity for HER of NiCo alloys were also carried out in alkaline solutions. 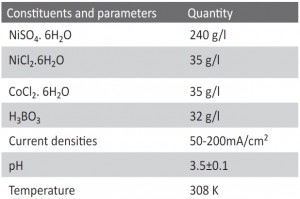 The surface morphology of the deposit were investigated by scanning electron microscopy (HITACHI Model S-3000H operated at 20 kV) and the content of Co and Ni in the alloy were measured by Energy- Dispersive X-ray Spectroscopy (EDX) attached with the SEM. A (PANalytical, model X’ per PRO) X- ray diffractometer with a Cu Kα radiation (λ=1.5418 Å) was used to determine the preferred crystal orientation of deposited NiCo alloy by using standard θ-2θ geometry. Crystallites sizes were calculated from the peak broadening of XRD pattern according to the Scherrer equation.

Potentiodynamic polarization test for both catalytic activity for HER and corrosion test were carried out in a 1M KOH solution using three-electrode cell with a platinum foil as counter electrode, a saturated calomel electrode (SCE) as reference electrode and the deposited alloy on copper disc electrode as working electrode. Before the polarization studies, the samples were kept in 1M KOH solution for about 250 s to stabilize the open-circuit potential (OCP). Polarization curves were recorded by sweeping the electrode potential from -250mV to till reaching the breakdown potential with respect to OCP at a sweeping rate of 1 mV/s. 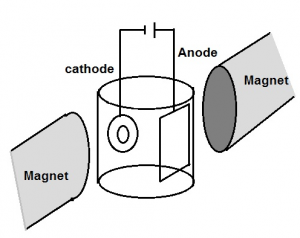 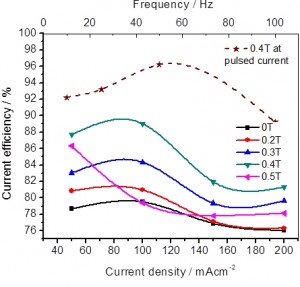 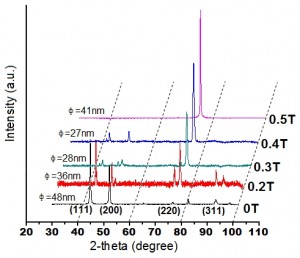 The surface morphologies and elemental composition of the deposited coatings were investigated by SEM and EDX attached with SEM, respectively. In order to compare the surface morphologies, the deposits were obtained from same electrolyte with and without magnetic field at 100mA/cm2 and the results are shown in Figure 4. The surface of the NiCo alloy coating from the mechanically stirred condition is made up of pyramidal crystals surrounded by tiny particles. The size and the shape of the grains were significantly changed due to the application of magnetic field parallel to the electrode surface. Moreover, the Lorenz force leads to increase in the concentration gradient at the electrode surface and hence the grains become finer and more compact. In Figure 4e shows the more compact and uniform deposits by the application of pulse current because during the pulse current deposition the off-time favors the replenishment of metal ion in double layer and hence fresh nuclei is formed on cathode surface. But low frequency of 10 Hz is having more on-time, so that during the on-time metal ions deficiency takes place and thereby non uniform deposit (Fig. 4c) is obtained. At high frequency (100Hz) the grains are bigger in size (Fig. 4f) due to very short off- time and there is time-lack for replenishment of metal ion in double layer which reduces formation of fresh nuclei is reduced. However, the elemental composition of cobalt was enhanced in electrodeposited Ni-Co alloy. Because, magnetic moment of cobalt is greater than nickel and hence larger magnetic susceptibility
is induced on Co2+ than Ni2+. The cobalt inclusion is enhanced in NiCo alloy while applying magnetic field. There is marginal effect on elemental composition of alloy by the application of pulsed current. 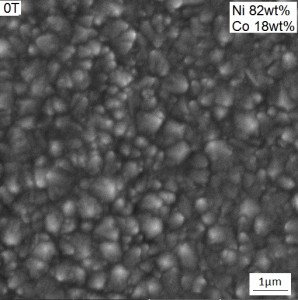 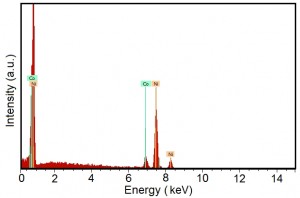 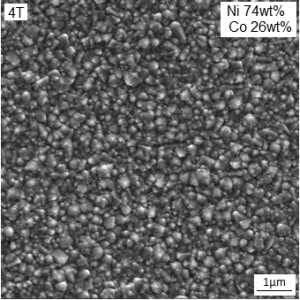 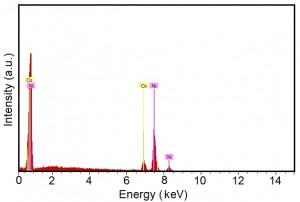 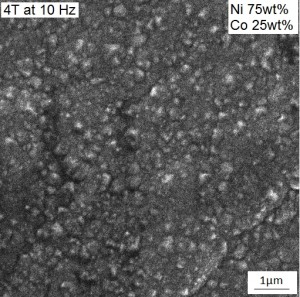 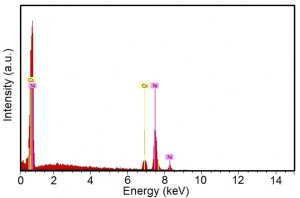 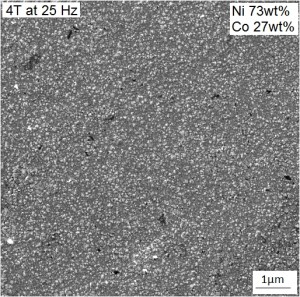 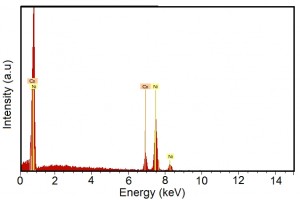 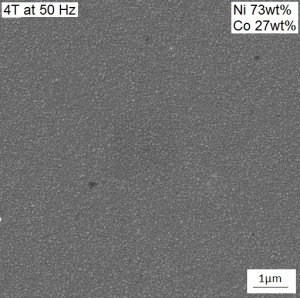 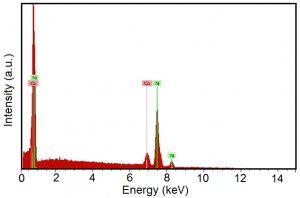 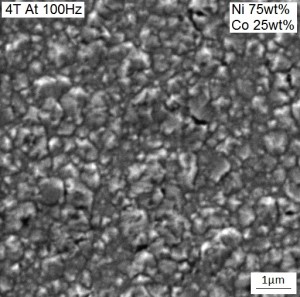 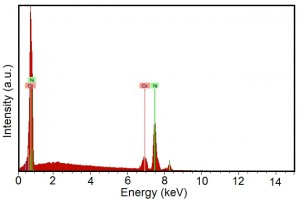 The potentiodynamic polarization technique is one of the methods to investigate electrochemical behavior of materials. Comparative investigations on electrochemical performance of NiCo alloys were carried out in 1M KOH solution. Figure 5 shows polarization curves of NiCo alloys and the cathodic region corresponds to the hydrogen evolution whereas the anodic region corresponds to the corrosion resistance property of the alloys. In order to investigate electrocatalytic activity of as deposited alloys linear Tafel fit is performed on cathodic region of polarization curve. The kinetic parameters such as Tafel slope and exchange current density are derived from the Tafel relationship <1> which is given bellow

Where, b is the Tafel slope; Jc the exchange current density and the values are summarized in table 2. The observed Tafel slopes are around 120mV/decade, which is in good agreement to the general model for the HER mechanism. The increased electrocatalytic activity is attributed to the grain refinement on surface morphology as well as an improvement in the intrinsic electrocatalytic properties of the material [31]. The Ecorr and jcorr are obtained from Tafel extrapolation and the results are given in table 2. It is noticed in table 2 the NiCo alloy deposited by pulsed current at 50Hz with 0.4T has better corrosion resistance as well as electrocatalytic activity than the other alloys. However, the alloys having preferred orientation of (220) exhibits better electrocatalytic activity than the polycrystalline of NiCo alloy obtained from without magnetic field. 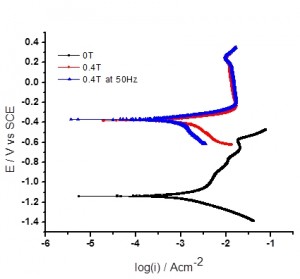 The electrodeposition of NiCo alloys were carried out by varying current density as well as magnetic field. The optimized condition for higher current efficiency is 100mA/cm2 at 0.4T. From the optimized condition pulsed current deposition were also carried out at four different frequencies. The superimposition of magnetic field on electrodeposition of NiCo alloys were investigated on current efficiency, surface morphology, crystal orientation and electrochemical property. The current efficiency and the surface morphology are significantly improved by applying pulsed current in the presence of magnetic field. Difference in magnetic susceptibility of metal ion alters the elemental composition of the alloy in presence of magnetic field. The preferential growth of (220) phase can be achieved by using pulsed current at lower magnetic field. The electrochemical properties of NiCo alloy in alkaline medium shows the enhancement of electro-catalytic activity and corrosion resistance property and this is due to the preferred orientation of (220) deposit.

One of the authors (S. Mohan) expresses his thanks to the Director, Central electrochemical research institute, Karaikudi for giving permission to do this work.