The demand for Zinc Nickel coatings continuously increases in the automotive industry. Especially interesting are zinc nickel alloys with a nickel incorporation of 12–16 %, due to their high corrosion protection as well as superior wear and heat resistance as compared to pure zinc and other zinc alloy coatings.
Despite many advantages of acid Zn-Ni electrolytes there are still some areas of application, like barrel plating or plating of complex-shaped parts, believed to be reserved for alkaline processes. In this paper zinc nickel coatings deposited from ammonium and boric acid-free acid zinc nickel electrolytes, with improved throwing power for rack and barrel applications are investigated. Their corrosion resistance, ductility and hardness will be presented. Moreover, their texture and morphology will be investigated using SEM, XRD and FIB methods. In the end thickness distribution and Ni-incorporation will be presented and compared to alkaline systems. 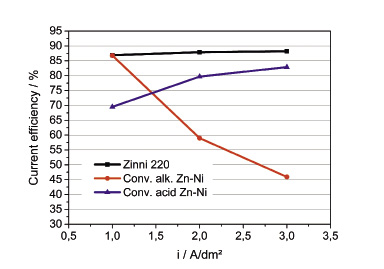 Fig. 15: Comparison of current efficiencies in dependence
on current densities for various Zn-Ni processes, measured
gravimetrically in a fresh electrolyte

The data used to plot the graph in figure 15 is collected in table 6. 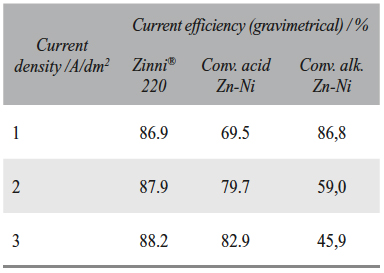 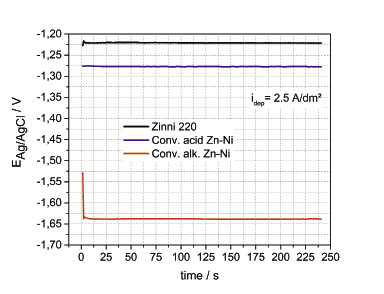 Fig. 17: Electrochemical evaluation of current efficiency for various acid Zn-Ni processes, measured during deposition at 2.5 A/dm2 (a) and in dependence on current density measured for Zinni® 220 (b)

Tab. 7: Current efficiencies of different Zn-Ni processes measured electrochemically in a fresh M-up during deposition at 2.5 and 0.7 A/dm2

In previous parts of the work the superior performance of Zinni® 220 as compared to other acid and alkaline Zn-Ni electroplating solutions has been shown. In this chapter the behavior of Zinni® 220 will be analyzed in more detail.

In the beginning an attempt has been made to characterize the changes in phase structure at various current densities when plated with Zinni® 220. As can be seen in figure 18 independently on the current density the main phase deposited is always the favored γ-phase. 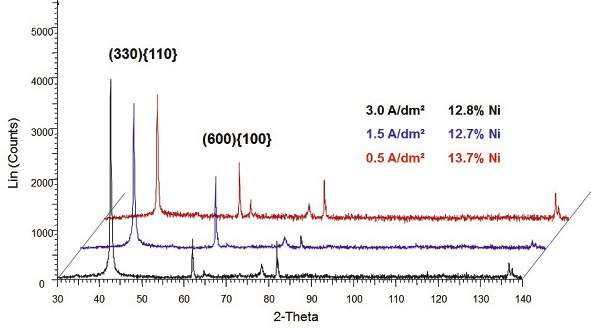 Figure 19 presents ALSV of Zn-Ni layers deposited galvanostatically from Zinni® 220 at different current densities. As can be observed Zn dissolution peaks shift with increasing deposition current density indicating that the phase structure of the deposit, although composed still mainly of γ-phase, changes the ratio between the constituent phases. At very low current densities (0.1 A/dm2) α-phase seems to dominate, but a small amount of η-phase can also be observed as a shoulder at -800mV. This is in agreement with other reports showing that Ni-rich phases are primarily deposited at very low current densities [9, 10, 17, 18]. At moderate current densities (0.5 and 1.0 A/dm2) more Zn is incorporated into the structure and compact γ-phase is formed as indicated by a peak at –550 mV. At relatively high current densities (2.5 A/dm2) the position of the Zn dissolution peak shifts again into more negative potential forming a multi-peak indicating existence of both α and η-phases. Assuming that α-phase peak is formed due to transition from γ-phase after partial Zn dissolution this corroborates well with previous results showing the increase of nickel incorporation at higher deposition current densities (see fig. 10). 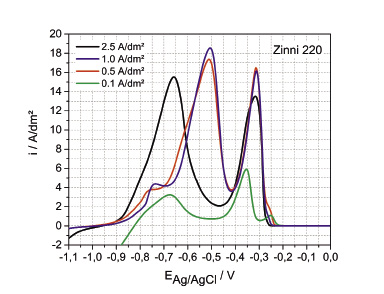 Fig. 19: ALSV of galvanostatically deposited Zn-Ni coating.
Deposition was done from Zinni® 220 at various current
densities at 35 °C with rotation speed of the RDE of
1000 rpm. The ALSV was done in metal ion free electrolyte
at 35 °C with 1000 rpm and potential scan rate of 10 mV/s

The morphology and texture of coatings deposited from Zinni® 220 electrolyte in a barrel and on the rack show slight differences. As can be observed in figure 21 when barrel plating is used for coating deposition a specific layer-by-layer deposition can be seen. In both cases the γ-phase is dominating however this kind of deposition influences obviously the texture what can be observed e. g. by differences in passivate acceptance between barrel and rack plated parts. 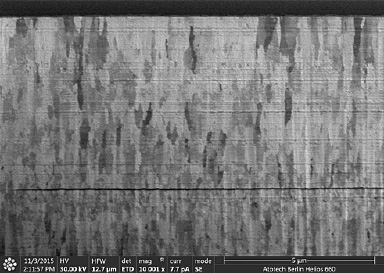 The way of coating deposition influences strongly the hardness of the deposits as can be observed in table 9. Parts plated in the barrel exhibit generally lower hardness. The difference can be even up to 15 %. 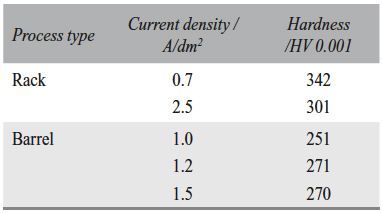 The collected data corresponds well to the literature where it was also stated that the hardness depends strongly on the stoichiometric Zn/Ni ratio and not on the grain size of the deposited material [19].

Superior corrosion resistance of gamma phase containing Zn-Ni coatings has already been proven in number of reports in this work therefore only the corrosion behavior of Zinni® 220 plated parts will be presented. Corrosion behavior of parts plated with Zinni® 220 has been tested in a neutral salt spray chamber according to ASTM B-117 both with passivation and with passivation and top coat. As can be seen in figures 23 and 24 after application of sealer all requirements for white and red corrosion for Zn-Ni coatings are easily fulfilled. Only slight white rust is to be seen on the head of the samples after over 1000 h in NSST. Moreover, when heat treatment is applied after the passivation step (with application of Tridur DB passivation) it is possible to achieve up to 500 hours in NSS chamber without any color change and without application of a top coat (see fig. 22). 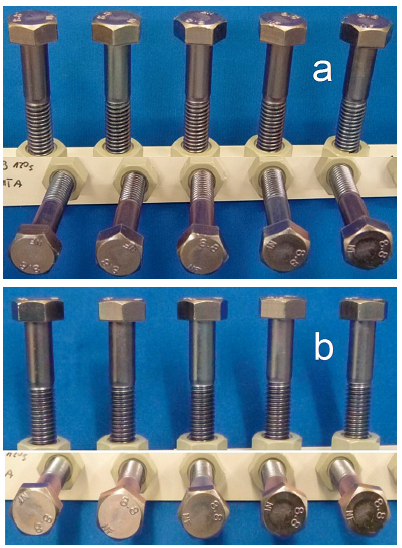 Fig. 22: M10 bolts coated with Zinni® 220 and passivated
with Tridur DB, heat treated (hydrogen de-embrittlement) at
210 °C for 4 hours after passivation; samples before NSS
test (a) and after 504 h in NSS chamber (b); test according to
ASTM B-117 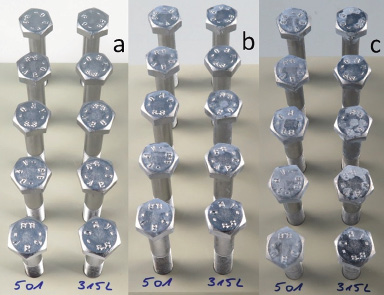 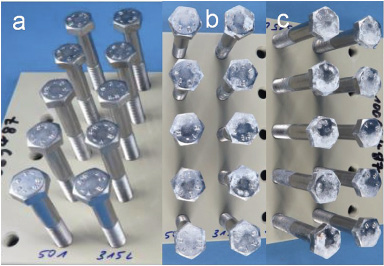 The parts were also examined according to Cyclic Corrosion Test VDA 233-102. Also in this case superior corrosion protection has been observed. Figure 24 presents the parts plated with Zinni® 220 passivated with EcoTri HC2 and sealed with Corrosil Plus 501 or Corrosil Plus 315L after 15 cycles showing no red rust.

Adhesion was tested by keeping parts at 300°C for 30 min followed by cooling in water. Coatings deposited using Zinni® 220 process at various current densities have been evaluated. As can be observed in figure 25 no blisters and no delamination of the coating can be observed after the test. 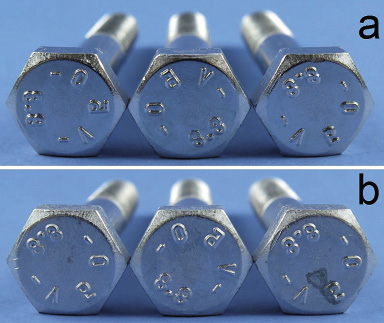 I would like to thank Dr. Sebastian Hahn for help with electrochemical measurements and our colleagues from Atotech´s Material Science Department for providing SEM, FIB and XRD data, especially Sebastian Bohn, Craig Bishop, Xiaoting Gu, Ajay Kumar and Ralf Schulz.