Excellent corrosion protection and low amount of volatile organic compounds (VOC) of water-based sol-gel coatings are attractive features for many applications. The sol-gel process is based on hydrolysis and condensation of organo-silicate materials in aqueous solution (Eqs. <1> and <2>):

A sol-gel film can be applied on a metal sample by dip coating, spin coating, or spraying. The film is condensed by means of a curing process as in Figure 1 [1]. After curing the sample for sufficient time, a cross-linked sol-gel film forms on the metal surface (Fig. 2).

The durability of the coating is often limited in the absence of self-repairing materials. Corrosion of the metal is generally irreversible, leading to eventual failure. Thus, active protective dopants are needed to reduce the corrosion effects. Several terms such as self-repair, self-healing and autonomic healing are used to define the ability of a material to heal (repair) damages without any external interference [2]. Sol-gel film containing inhibitors acts as storage for corrosion inhibitors. After a defect appears in such a film, the sample protects itself by releasing the inhibitors to form a protective layer on the defected area and thus heals the corroded surface (Fig. 3).

Lamaka [3] prepared a TiO2/inhibitor/sol-gel coating system for corrosion protection of aluminum alloys. The porous titanium oxide layer was applied to the substrate by dip coating. Subsequently, the sample was immersed in Ce(NO3)3 and benzotriazole solutions to encapsulate the corrosion inhibitors in the pores of the layer. The sample was dried for 30 min at 80 °C. A sol-gel film from hydrolyzed 3-glycidoxypropyltrimethoxysilane (GPTM) sol was then applied as topcoat. Experiments demonstrated that the TiO2 coating acted as a reservoir for corrosion inhibitors. Specimens coated with the TiO2/inhibitor/sol-gel system showed better corrosion protection and selfhealing ability.

Fig. 3: Schematic of self-healing mechanism of sample doped with inhibitors

Shi produced a sol-gel coating containing cerium salt [4]. The study examined the effect of selected cerium salts on the self-healing of the coating. Corrosion measurements were carried out in low-chloride solution (Harrison’s solution). As a result, cerium nitrate showed a positive effect on self-healing. Limited protection performance was measured for cerium chloride; pitting corrosion beneath the sol-gel film was observed, which was caused by chloride ions from cerium chloride.

Yasakau [5] tested the stages where inhibitors can be added to the sol, and their effect on overall corrosion protection. Cerium salts and 8-hydroxyquinoline (8HQ) were used as dopants to generate the self-healing ability. Adding 8HQ during the hydrolysis process of the sol precursor reduced corrosion protection. Complexes were formed by interaction of the organo-metallic compounds and 8HQ. The complexes had negative influence on the chemistry of the sol and on film formation. In contrast, the addition of cerium salt at any hydrolyzing step improved the corrosion protection.

In this work, self-healing of the samples was generated by means of a sol-gel film containing corrosion inhibitors. The aim of this work is to characterize a defect in the samples before and after healing. Electrochemical impedance spectroscopy (EIS) was used to evaluate protection performance. Healing qualification was estimated by monitoring scratch surface profiles using a contact stylus instrument. A scanning electron microscope (SEM, LEO 1455VP) was used to characterize the layer formed in the defect after healing.

A hybrid sol was prepared by hydrolyzing organo-silicate compounds: 40 percent sol was prepared from tetraethyl orthosilicate (TEOS), 3-glycidoxypropyltri-methoxysilane (GPTM) in a 1:1 volume ratio with acid as catalyst and water as solvent. The solution was aged at room temperature for three days. Benzotriazole and cerium nitrate were added to the sol as dopants. Selected concentrations of the functional species were tested. Our previous work has shown that corrosion protection improves with increasing inhibitor concentration [6]. The amount of inhibitors should not exceed the solubility limit, i.e., 1000 ppm of benzotriazole yield the best protection efficiency. The required amounts of inhibitors were introduced to the sol, which was stirred until complete dissolution of the inhibitors. The coating was then applied by dip coating. Reference samples without any corrosion inhibitor additives were prepared for comparison. All chemicals in this work had been obtained from Merck GmbH and were applied without further purification.

Aluminum alloy 6082 was used as metal substrate. The samples were ground to grade 2400 by means of SiC emery paper, rinsed with water and ethanol, and then air-dried. The substrate had to be completely water-wettable. The samples were dip coated in the sol for 30 seconds. The coating was dried at room temperature for one hour, and then cured at 150 °C for three hours.

Electrochemical measurements were started with the open-circuit potential test for two hours to ensure system stability. EIS using Zahner impedance with Thales Box IM6 was employed to evaluate the protection performance of the samples. Corrosion measurements were carried out in 0.5M NaCl solution, at pH 7 and a temperature of 25 °C. EIS spectra were recorded at frequencies from 105 to 10–3 Hz and at an amplitude of ±10 mV. A corrosion cell with three electrodes was applied. A saturated calomel electrode (SCE) was used as reference, coupled capacitively to Pt wire in order to reduce phase shift at high frequencies. The counter electrode was a Pt sheet. The specimen was fixed to a sample holder with an exposed area of 3.14 cm2. Impedance spectra were fitted by commercial software from Zahner. A proper equivalent circuit was chosen to evaluate the corrosion protection. The coating resistance Rc was determined to compare the protection efficiency of the samples.

The coating surfaces were intentionally damaged by means of a scratch test instrument with a diamond tip (CSM Revetest® 27-445). The defects were prepared under a stable load of 10 N and a scratch length of 10 mm.

To study self-healing, the injured samples were immersed in 0.5 M chloride solution at room temperature for selected periods (48, 96, and 196 h). The characterization and qualification of the healing process were carried out after the corresponding immersion period.

Electrochemical characterization of self-healing was carried out in chloride solution. The evolution of coating resistance (Rc) was determined to estimate the protection performance. The course of spectra phase shift versus frequency was used to evaluate changes in the defect area during the immersion test period.

Self-healing qualification was estimated by monitoring defect dimensions before and after healing. A contact stylus instrument according to DIN EN ISO 3274 was employed to identify the defect depth and width. A scanning electron microscope (LEO 1455VP) was used to characterize the defect surface profile at an electron beam energy of 1.2 kV.

Electrochemical characterization of self-healing was carried out after a specific immersion period of the injured samples in 0.5 M NaCl. Figure 4 illustrates EIS spectra of the sol-gel-coated aluminum samples. The phase shift versus frequency range shows two time constants after an immersion period of 96 hours. The time constant TC1 at high frequency is related to the sol-gel coating. TC2 refers to the intermediate layer of the coating. After an immersion period of 96 hours of the samples coated with non-doped film, the corrosive electrolyte causes the growth of the original defects in the coating. This opens pathways for the corrosive solution toward the aluminum surface. An active corrosion process occurs and an apparent drop in the total impedance value can be seen after 196 hours (Fig. 4).

Different corrosion inhibitors at altered concentrations were used in this work. Our previous study has shown that cerium nitrate with concentrations of 20 000 ppm and 1000 ppm of benzotriazole provide the best corrosion protection.

Figure 5 demonstrates EIS spectra of the aluminum substrates coated with inhibitor-doped sol-gel film. The samples showed barrier properties and good stability in chloride solution. An intermediate layer was observed after a 96-hour immersion period (TC3 in Fig. 5b), which is related to the precipitation of corrosion inhibitors in the defect. Due to the defects in the coating, the impedance value at high frequency decreased after 196 hours (Fig. 5a). As a result of corrosion, a protective layer formed on the metal surface via self-healing, which kept the overall impedance of the sample high. The development of the new layer is confirmed by the course of the time constant TC3 after 96 as well as after 196 hours. Impedance spectra of the samples coated with inhibitor-doped film show that the corrosion protection remains significantly higher than that of the samples coated with non-doped film.

The self-healing mechanism of samples coated with cerium-doped film is based on the coating releasing cerium ions to the damaged area. Oxygen reduction at the cathodic area in the scratch takes place according to Equation <3>:

Healing due to cerium salts is based on a formation of insoluble oxide. This oxide precipitates on the area where the cathodic reaction takes place. The inhibition mechanism of cerium salt as cathodic inhibitor is described in Equation <4>. 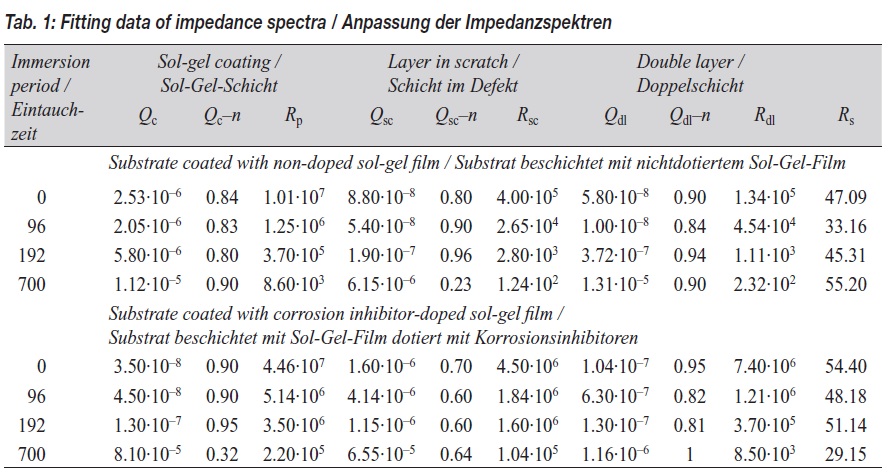 The defect volume was qualitatively studied by 3-D microscopy. It was observed that after damaging the samples coated with the inhibitor-doped film (Sample A) by means of constant load (10 N), no corrosion was detected even after 700 hours in chloride solution, while the samples coated with non-doped sol-gel film (Sample B) were destroyed and pitting corrosion occurred as in Figure 8.

More information on the defect profile before and after the healing process was obtained by SEM inves tigations. The surface profile exploration showed that the defect before the healing process was quite rough; cracks at the scratch edges can be distinguished (Figure 9a). After an immersion period of 700 hours in chloride solution, full recovery of the defect surface was obtained for the samples coated with inhibitor-doped film. A new layer was formed in the defect and on the cracks at the scratch edges (Figure 9b). The samples coated with non-doped inhibitor film were destroyed and pitting corrosion was observed as in Figure 9c.

The scratch surface profile obtained with a contact stylus instrument was studied to characterize the precipitated materials in the defect as a criterion for the healing quality of the samples. Figure 10 shows surface profiles of selected defects. After the immersion test, the defect in the samples coated with inhibitor-doped film is smaller than the defect in the untested sample. The reduction in defect depth and width confirms the precipitation of corrosion inhibitors due to self-healing. Aluminum samples coated with non-doped film have the biggest defect dimensions after the corrosion test; this corroborates the results observed via the electrochemical measurements and SEM investigations. 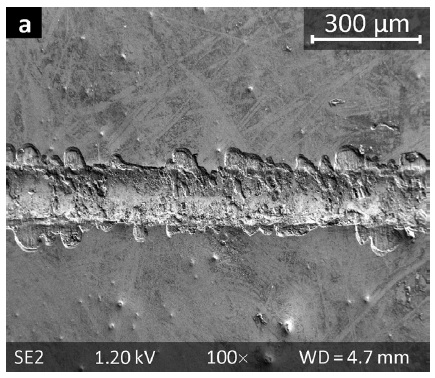 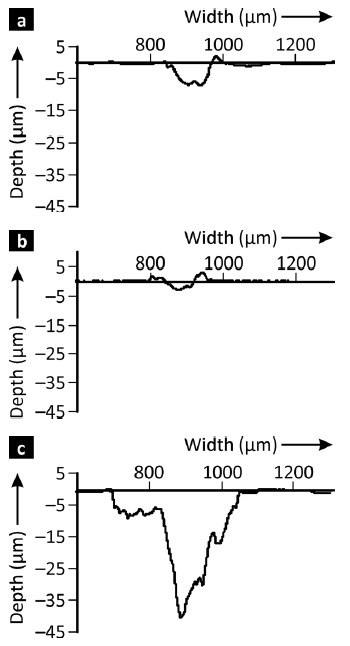