The microstructure of oxalic-acid-anodized layers on AlMn0.5Mg0.5 alloy is compared to such layers on aluminum. Differences originate from four types of precipitates occurring in the alloy, forming inclusions in the layers, roughening surface and interface, and modifying typical pore structures of anodized aluminum oxides. A characteristic feature of this modification is the appearance of transverse channels in pore walls. Nanoscaled precipitates are suggested as their origin. Correlation to functional properties such as microhardness and electrical isolation behavior is discussed.

High specific strength and low density of aluminum and its alloys have led to their growing importance in mechanical and automotive engineering, particularly in the past 20 years [1]. Applications in lightweight constructions substituting steel and other materials require well-defined surface properties depending on environmental and load conditions. Anodizing in aqueous sulphuric acid under a direct-current regime is the most commonly used surface finish to prepare decorative, wear- and corrosion-protecting coatings on aluminum [2]. Physical properties of the anodized film depend primarily on the composition of the electrolyte, influencing voltage to be applied due to conductivity, on process parameters such as current density and temperature, as well as on the duration of anodizing which determines film thickness [3]. Oxalic acid is frequently used as additive in conventional sulphuric acid electrolytes. Due to inherent properties, pure oxalic-acid anodizing features distinct differences compared to anodizing with sulphuric acid. The lower dissolution rate of oxalic acid allows film conversion at ambient temperatures and forms denser oxide walls [4]; typical pores of anodic alumina coatings show larger diameters since the lower conductivity of oxalic acid calls for higher anodizing voltage. Sulphuric acid anodizing has been well-documented for aluminum as well as its alloys [5-14]. Oxalic-acid anodizing of pure aluminum has become popular in formation of ordered nano-pores as template systems [15]. However, only few results have been published on oxalic-acid anodizing on aluminum alloys for applications in engineering [16].

The common morphology of the oxide layer is modified due to the chemical behavior of intermetallic particles in aluminum alloys. In sulphuric acid electrolytes, chromium and iron can form bubbles, 10 to 100 nm in diameter, copper and manganese accumulate at the surface and interface of the oxide layer, copper and magnesium promote enhanced dissolution connected to pitting or higher porosity, iron forms Fe-Al mixed oxides, and the partial oxidization of silicon is associated with oxygen-filled cavities above [6-14]. Effects of these findings for anodic oxide layers prepared from oxalic acid electrolytes are to be examined.

Thus, the influence of precipitate-containing microstructures of AlMn0.5Mg0.5 alloys on oxalic acid anodized film is studied and compared to similar anodized layers on pure aluminum. Changes in microstructure of the conversion layers considerably influencing functional properties such as microhardness and breakdown voltage are discussed.

Plates (dimensions 0,8×50×90 mm3) of aluminum Al99.5 and AlMn0.5Mg0.5 alloy (Tab. 1) were anodized in oxalic acid (50 g/l) at moderate temperature (15 °C) in a typical anodizing setup with graphite electrodes. Different current waveforms, direct current (DC), alternating current (AC) and combinations thereof, were applied maintaining mean current density of 4 Adm–2 on a specimen surface of 0.9 dm2. The anodizing container was specially equipped with four sonotrodes and a membrane pump for bath agitation providing means for adding finely dispersed particles to the electrolyte. After degreasing, samples were pickled in sodium hydroxide solution (15 %) at 45 °C for 90 s, and thoroughly rinsed in water.

Mean layer thicknesses were determined on ten points of the cross sections using an optical microscope. Pore statistics were acquired by greyscale correlation on SEM micrographs. Micro-indentation hardness testing (HM2000 XYm, Helmut Fischer GmbH) was used to determine mean Vickers hardness which was derived from five individual Martens hardness measurements on the cross sections by conversion. To evaluate electrical isolation behavior of the coatings, the mean breakdown field strength was determined ten times per sample. Hardness and breakdown field strength were determined on layers with a minimum thickness of 25 μm.

Starting point of the investigations was the question, whether nano-particles can be incorporated into the conversion layer during anodic oxidation. Neither dispersed particles as electrolyte additive, application of ultrasound to avoid agglomeration, nor anodizing with alternating current for particle incorporation during interrupted layer formation had this effect. Furthermore, on the basis of a parameter field with 130 studied samples under constant anodizing voltage, it is stated that the influence of such modifications on pore density and pore diameter is marginal.

Statistical analysis of pore geometry on the surface of oxide layers results in a lowered pore density with slightly enhanced pore diameters for ACanodized layers compared to DC-anodized layers at nearly unchanged area ratios (Fig. 1), which can be explained due to enhanced dissolution during layer formation interruptions. Minor changes in pore geometry across the layer take place continuously. Differences or boundaries did not become evident in scanning electron microscopy. However, a remarkable difference to layers on pure aluminum is observable. DC-anodized oxide layers on AlMn 0 . 5Mg 0 . 5 alloy (Fig. 2a) show slightly coarsened pore structure compared to a corresponding layer on pure aluminum (Fig. 2b), most notably are the rough surface, mirrored by a rough interface, and different inclusions of intermetallic phases originating from the alloy. Moreover, the formation rate of the conversion layer is higher on pure aluminum, but not truly demonstrated in Figure 2 due to the different layer formation times used. 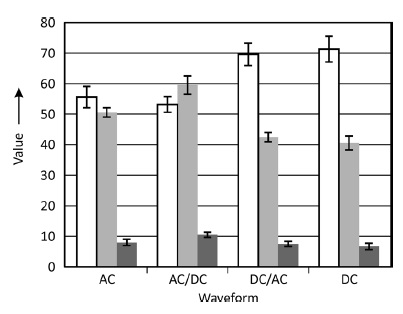 Alloy microstructure shows elongated crystals with a typical rolling texture and four types of precipitates, first of all differing in size and shape. Micron-sized precipitates appear in SEM (Figs. 3a–b) as rodshaped or longish grains, mostly containing manganese and iron (Type 1), as well as rounded equiaxed grains additionally containing silicon (Type 2). Aside from the composition of these grain-boundary precipitates, the aluminum matrix contains a remarkable fraction of dissolved silicon and magnesium. A third type of precipitates containing mostly silicon and magnesium is about 100 nm in diameter. Therefore, metastable Type 4 MgSi2 precipitates are most likely, and are assumed to nucleate the Type 3 dispersoid phase [17]. Evidence for these nano-scaled MgSi2 precipitates is given in STEM and TEM bright field images (Figs. 4a–b). Likewise, the dispersoids are shown in the BS image (Fig. 5), recorded by in-lens detection of low energy (1.2 kV) backscattered electrons. Energy-sensitive detection of high angle BS electrons delivers material contrast at very high resolution, enabling imaging of many Type 4 precipitates between few Type 3 precipitates. 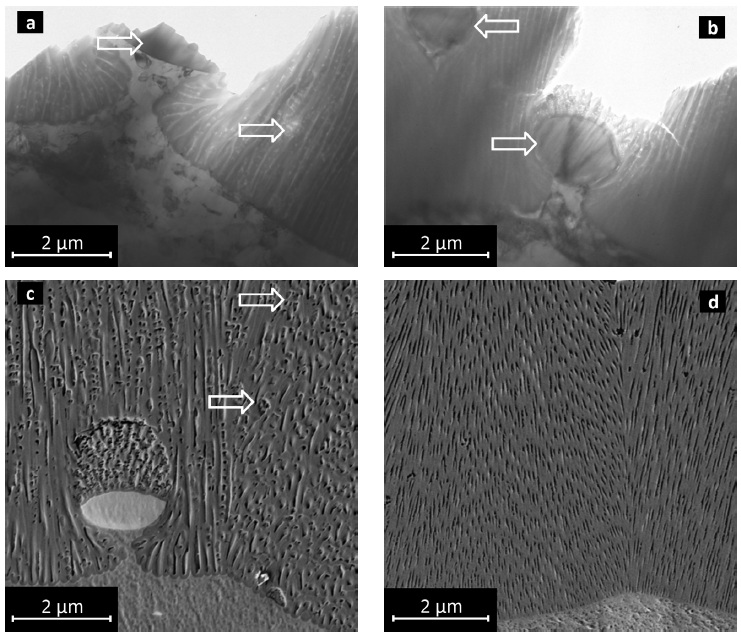 The nature of precipitates strongly effects formation and morphology of the anodized layer. Micron-sized precipitates in the substrate (lower part of Fig. 2a) appear as inclusions in the conversion layer (i.e., in the upper part of Figs. 2a and 4a–c). Anodizing caused partial conversion of these precipitates resulting in a sponge-like pore structure on top. Anodizing of the aluminum matrix below Type 1 precipitates is delayed due to shielding caused by the intermetallic particles (Figs. 4a–c), mainly contributing to the rough layer surface and interface as well as to the shifting of the pores from layer normal. These pores were studied in detail by SEM and TEM imaging (Figs. 4a–c and 7). The arrow in Figure 7 marks a frequently occurring nano-disruption, which can also be observed in Figures 2a, 4a, 4c and 6, and is most likely to be caused by the small Type 3 precipitates. Another striking feature is the perforated appearance of the pore walls. Such transversal channels in pore walls were observed in all anodized layers on AlMn0.5Mg0.5 alloy regardless of the current waveform, and were not observed in anodized layers on pure aluminum (Fig. 4d). Thus, we suggest that these transverse channels are related to nano-scaled metastable Type 4 precipitates, e.g. distorted regions of the matrix lattice. These transition phases impose local chemical differences and local mechanical strains, and hence seem to account for different anodizing behavior of the matrix resulting in transversal pores in the conversion layer.

In summary, the differences in migration speed of ions and dissolution behavior of alloy components result in local distortions of the direction of pore growth, formation of local imperfections, and hence in a 25 percent reduction of the integral growth rate of the conversion layer on AlMn0.5Mg0.5 alloy, compared with the growth rate on aluminum for equal anodizing conditions in oxalic acid. Compared to layers on pure aluminum, layers on the alloy show enhanced pore densities and enhanced mean pore diameters. Additionally, transverse pores are observed. Functional properties of anodic oxide layers such as Vickers hardness and breakdown field strength are influenced. Vickers hardness of layers on pure aluminum with values of 530 to 590 HV0.01 is enhanced by 25 percent compared to layers on AlMn0.5Mg0.5 alloy with values of 425 to 450 HV0.01. These lower values seem to be due to the existence of transverse pores in the layer. Breakdown field strength is a function of layer thickness; therefore, breakdown field strength relative to layer thickness is assessed. The mean value of layers on pure aluminum is 10 V/μm, the mean value of layers on the alloy is 16 V/μm. Compared to the minor influence of process modifications (current waveforms, ultrasonic agitation, dispersed particles as electrolyte additive), the base material remarkably influences the properties of the studied conversion layers.

In comparison to pure aluminum, the different precipitates in AlMn0.5Mg0.5 alloy have an effect on the microstructure of the anodized layer due to locally different anodizing rates. Inclusions of partially oxidized precipitates, rough surface morphology, uneven layer-substrate interfaces, and deviations of the direction of pore growth originate from precipitates different in composition and size. Nanoscaled precipitates are suggested to be the origin of transverse channels in pore walls, observed regularly in oxalic-acid anodized layers on AlMn0.5Mg0.5 alloy. The significant dependence between layer microstructure and functional properties is documented by decreased Vickers hardness and enhanced breakdown field strength of the layers on the alloy.