The purpose of this paper is to understand the effect of 2Cu+2Ni addition on electrochemical corrosion behavior of thermal treated Al-6Si-0.5Mg alloy in 0.1M NaCl solution. The corrosion of the thermal treated samples was characterized by electrochemical potentiodynamic polarization technique consisting of linear polarization method using the fit Tafel plot and electrochemical impedance spectroscopy (EIS) techniques. Generally, from the linear polarization, the corrosion rate decreases at thermal treated Al-6Si-0.5Mg-2Cu-2Ni alloy (Alloy-2). The corrosion behavior of the Alloy-2 in the 0.1M NaCl solution showed better resistance than the Alloy-1. The EIS test results also showed that the changing of charge transfer resistance (Rct) is significant with the combined addition of 2Cu+2Ni to Al-6Si-0.5Mg alloy. The magnitude of the noble shift in the open circuit potential (OCP), corrosion potential (Ecorr) and pitting corrosion potential (Epit) increased with the addition of 2Cu+2Ni to Al-6Si-0.5Mg alloy.

Aluminium and its alloys are considered to be highly corrosion resistant under the majority of available service condition. The Al alloy containing copper are the least resistant to corrosion; but this can be improved by coating each side of the copper containing alloy with a thin layer of high purity aluminium, thus gaining a three ply metal, i.e. Alclad. This cladding acts as a mechanical shield and also protects the material by sacrificial. When aluminium surface is exposed to atmosphere, a thin invisible oxide (Al2O3) skin forms, which protects the metal from corrosion in many environments.  This film protect the metal from further oxidation unless this coating is destroyed, the material remains fully protected against corrosion. The composition of an alloy and its thermal treatment are of important for susceptibility of alloys to corrosion [1-3].

Over the years a number of studies have been carried out in order to assess the effect of Cu content and the distribution of second phase intermetallic particles on the corrosion behavior of Al alloys. The Cu distribution in the microstructure affects the susceptibility to localized corrosion. Pitting corrosion is usually occurs in the Al matrix near Cu containing intermetallic particles owing to galvanic interaction with Al matrix. Intergranular corrosion (IGC) is generally believed to be associated with Cu containing grain boundary precipitates and the PFZ along grain boundaries [2]-[4]. In heat treatable Al-Si-Mg(-Cu) series alloys, it was found that, the susceptibility to localized corrosion (pitting and/or intergranular (IGC)) and the extent of attack are mainly controlled by the type, amount and distribution of the precipitates which form in the alloy during any thermal or thermomechanical treatments performed during manufacturing processes [5]-[9]. In Ni-containing alloys the eutectic phase E consists of more or less soft ‘eutectic Al (αE)’ and hard ‘eutectic Si and Al3Ni [10]. When Ni is added to the Al-Si system, the eutectic transformation is characterized by a simultaneous formation of eutectic Si and Al3Ni and consequently, eutectic Si and Al3Ni form a geometrically entangled system. During the course of a solution treatment eutectic Al3Ni does not significantly change its shape, as can be metallographically observed. Furthermore, in the presence of Ni-aluminides the loss of interconnectivity of eutectic Si is significantly reduced [11], [12].

In Al-Si-Mg alloys with increasing Ni concentration up to 2%, whereas the positive effect of Ni is much more considerable for the solution-treated alloys, especially with respect to the yield strength. While for Ni-containing alloys the contiguity of the ‘eutectic Si and Al3Ni’ is more or less preserved due to the presence of Ni-aluminides, the spheroidization of the eutectic Si in the Ni-free alloy  (AlSi2(Mg)) results in its reduced contiguity and thus reduced strength [11], [12]. Depending on the composition of the alloy and parameters of the heat treatment process, these precipitates form in the bulk of the grain, or in the bulk as well as grain boundaries. As indicated by several authors, the precipitates formed by heat treatment in Al-Si-Mg alloys containing Cu are the θ (Al2Cu) Q-phase (Al4Mg8Si7Cu2), β-phase (Mg2Si) and free Si if Si content in the alloy exceeds the Mg2Si stoichiometry [13], [14].

The present study is an attempt to investigate effect of 2Cu+2Ni on the electrochemical corrosion behavior of Al-6Si-0.5Mg alloy in NaCl solution and examined corroded surfaces by optical and scanning electron microscopy.

The Al-6Si-0.5Mg and Al-6Si-0.5Mg-2Cu-2Ni alloys were utilized by melting Al-7Si-0.3Mg (A356) alloys, adding Cu wire and Ni chips into the melt. The cast samples were homogenised (500oC for 24 hr) and solutionized (540oC for 2hr) and finally artificially aged (225oC for 1 hr). After heat treatment the rectangular samples (30mm x 10mm x 5mm) were prepared for metallographical observation and finally subjected to electrochemical test. Deionized water and analytical reagent grade sodium chloride (NaCl) were used for 0.1M solution preparation. All measurements were carried out at room temperature.

Potentiodynamic Polarization Measurements-A computer-controlled Gamry Framework TM Series G 300™ and Series G 750™ Potentiostat/Galvanostat/ZRA was used for the electrochemical measurements. The Potentiodynamic polarization studies were configured in cells, using three-electrode assembly: a saturated calomel reference electrode, a platinum counter electrode and the sample in the form of coupons of exposed area of 0.50 cm2 or 10mm x 5mm as working electrode. Only one 10mm x 5mm surface was exposed to the test solution, the other surfaces being covered with Teflon tape. The system was allowed to establish a steady-state open circuit potential (OCP). The potential range selected was -1 to +1V and measurements were made at a scan rate of 0.50 mV/s. The corrosion current (icorr), corrosion potential (Ecorr), pitting corrosion potential (Epit) and corrosion rate (mpy) were calculated from Tafel curve. The tests were carried out at room temperature in solutions containing of NaCl at a fixed and neutral pH value. The corroded samples were cleaned in distilled water and examined under scanning electron microscope.

As in potentiodynamic polarization test, three electrode cell arrangements were also used in electrochemical impedance measurements. Rectangular samples (10mm x 5mm) were connected with copper wire and adopted as working electrodes for impedance measurements. EIS tests were performed in NaCl solution at room temperature over a frequency range of 100 kHz to 0.2 Hz using a 5mV amplitude sinusoidal voltage. The 10mm x 5mm sample surface was immersed in NaCl solution (corrosion medium). All the measurements were performed at the open circuit potential (OCP). The test cells were maintained at room temperature and the NaCl solution was refreshed regularly during the whole test period. The impedance spectra were collected, fitting the experimental results to an equivalent circuit (EC) using the Echem Analyst TM data analysis software and evaluating the solution resistance (Rs), polarization resistance or charge transfer resistance (Rct) and double layer capacitance(Cp) of the thermal treated alloys.

The open circuit potential (OCP) with exposure time of aged Al-6Si-0.5Mg- (2Cu+2Ni) alloys in NaCl solution is shown in Table 1. Large fluctuations in open circuit potential for the alloys were seen during the time of 100s exposure. Afterwards the OCP fluctuation decreases and reached about steady state after a period of exposure. The steady state OCP of Cu free alloy (Alloy-1) is -0.8454 V and it is the negative potential than the OCP value (-0.6445V) of the Cu and Ni content alloy (Alloy-2). The occurrence of a positive shift in the OCP of combined 2wt% Cu and 2wt% Ni added to Al-6Si-0.5Mg alloy indicates the anodically controlled reaction. The OCP values mainly depend on the chemical compositions and thermal history of the alloys. 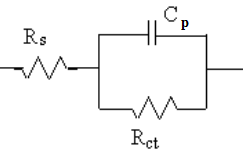 Fig. 1: Electrical equivalent circuit used for fitting of the impedance data of the Alloys 1 and 2 in NaCl solution

The data obtained were modeled and the equivalent circuit that best fitted to the results is shown in Figure 1. Rs represent the ohmic solution resistance of the electrolyte. Rct and Cp are the charge transfer resistance and electrical double layer capacitance respectively, which correspond to the Faradaic process at the alloy/media interface. Figure 2 shows the Nyquist diagrams of the alloys in the NaCl in de-mineralized (DM) water. Nyquist curves with suggested equivalent circuit model for the different Cu content in NaCl solution is shown in Figure 3. In Nyquist diagrams, the imaginary component of the impedance (Z”) against real part (Z’) is obtained in the form of capacitive-resistive semicircle for each sample. 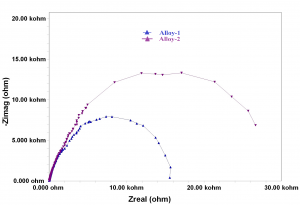 Fig. 2: Nyquist plot for the Alloys 1 and 2 in NaCl solution 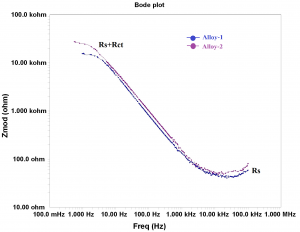 Fig. 3: Bode plot for the Alloys 1 and 2 in NaCl solution

Figure 3 shows the experimental EIS results in Bode magnitude diagram for Al-6Si-0.5Mg (-2Cu) alloys. Bode plots show the total impedance behaviour against applied frequency. At high frequencies, only the very mobile ions in solution are excited so that the solution resistance (Rs) can be assessed. At lower intermediate frequencies, capacitive charging of the solid-liquid interface occurs. The capacitive value Cp can provide very important information about oxide properties when passivation or thicker oxides are formed on the surface. At low frequency, the capacitive charging disappears because the charge transfer of electrochemical reaction can occur and this measured value of the resistance corresponds directly to the corrosion rate. For this reason, this low frequency impedance value is referred to as polarization or charge transfer resistance (Rct).

The solution resistance of the alloys varies from 40-45Ω and the Rs values of the alloys are very similar to each other. So there are insignificant changes of Rs values for the alloys during EIS testing. The solution resistance is negligible with respect to Rct and the electrolyte behaves as a good ionic conductor. Impedance measurements showed that in NaCl solution, increasing Cu in the Al-6Si-0.5Mg alloys increases the charge transfer resistance (Rct). For the reference Al-6Si-0.5Mg alloy (Alloy-1), the charge transfer resistance (Rct) value in NaCl solution is 15.57kΩ, and this is increased to 27.95kΩ with the addition of 2Cu+2Ni to the Al-6Si-0.5Mg alloy. These increases in the charge transfer resistance show the increase in the corrosion resistance of 2Cu+2Ni content alloy. The double layer capacitance (Cp) of the Alloy-1 is 1.259µF, which is lower value (1.773µF) than the investigated Alloy-2. 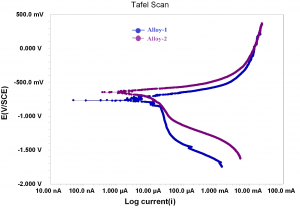 Fig. 4: Potentiodynamic polarization curves of Alloys 1 and 2 in NaCl solution

The microstructure of some selected as-corroded samples after electrochemical corrosion study using SEM indicates some pronounced pits; showing that the samples have suffered pitting corrosion attack. The exposure surface shows evidence of localized attack at the location of the intermetallic caused by the dissolution of the matrix. There was evidence of corroding products of intermetallic compounds in all the samples examined. Besides, several pits are visible in all samples examined. It is provable that the pits are formed by intermetallic dropping out from the surface due to the dissolution of the surrounding matrix. However, it is also possible that the pits are caused by selective dissolution of the intermetallic/or particles of the second phase precipitates. Consequently, the forms of corrosion in the studied alloys are slightly uniform and predominantly pitting corrosion as obtained by the SEM. Samples were characterized by SEM following potentiodynamic polarization tests. The peakaged Alloy-1 exhibited pits on the surface (Fig. 5), which apparently had nucleated randomly. The pits are deeper and larger in Alloy-1 than Alloy-2. Conversely, the exposed surface of the alloys exhibited a corrosion product covering the surface after polarization. All the micrographs (Fig. 5 and 6) also showed that there was no corrosion occurs in the fragmented and modified Al-Si eutectics. 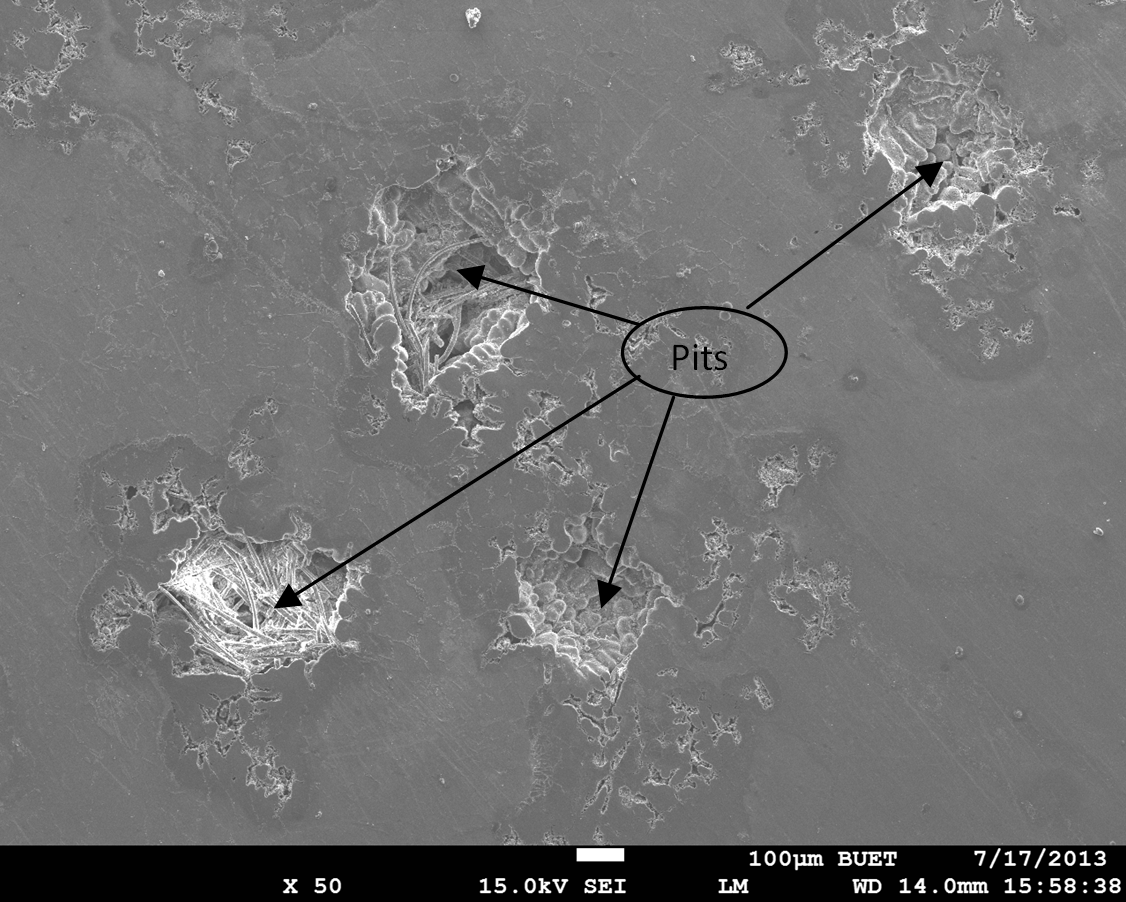 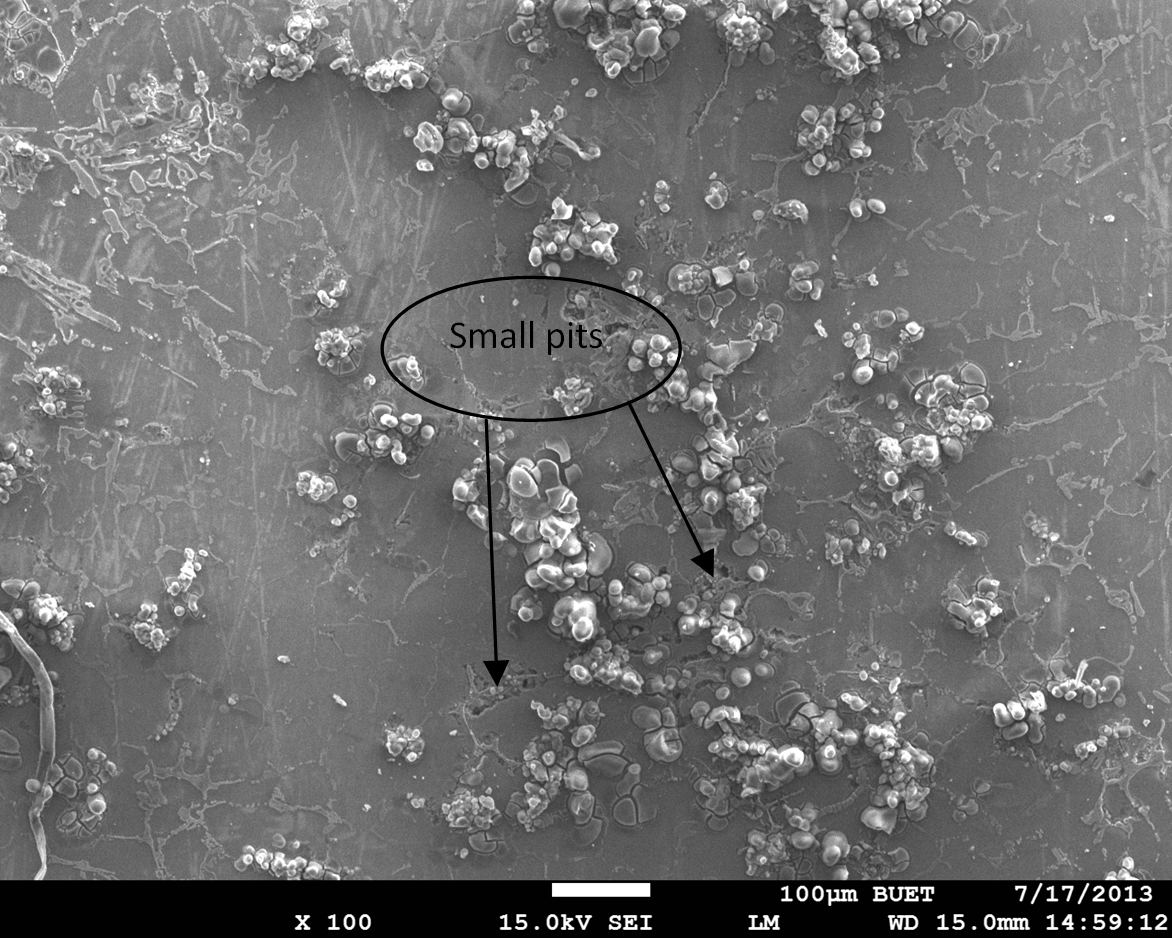 Fig. 6: SEM images of the damage surface morphology of Alloy-2 in NaCl solution

The following remarks may be concluded from the above investigation:

The authors declare that there are no conflicts of interest. The authors are also thankful to Pilot Plant and Process Development Centre (PP & PDC), BCSIR, Dhaka, Bangladesh, for carried out the electrochemical test.