This article focuses on ecotoxicological properties of chromium(VI) compounds, their behavior in the environment, as well as consequences for safe handling such compounds. In natural environments, chromium is usually part of complex compounds. Therefore, higher concentrations of biologically available chromium compounds are mostly due to human activity. Trivalent and hexavalent chromium remain stable in natural environments. Both oxidation states are inter-convertible via redox reactions. As studies on organisms at all levels of the food chain show, hexavalent chromium is characterized by relatively high acute and chronic aquatic toxicity. From a regulatory point of view, this implies that additional risk management measures are necessary in order to reduce the input of chromium(VI) compounds into the environment as far as possible. At the same time, the properties of the substance call for an intensive search for substitute materials and processes that guarantee the functionality needed but cause less problems for human health and the environment. Further details are available in European Risk Assessment Report 53 [1].

Chromic iron is the base material for most chromium compounds. In terms of its properties, hexavalent chromium differs significantly from trivalent chromium. When assessing the impact on the environment (and thus, for human health as well), it is therefore very important to specify the oxidation number.

Figure 1 shows a number of quantitatively important compounds of trivalent and hexavalent chromium.

In order to evaluate concentration data of chromium in the environment, particular focus has to be set on what the data precisely refer to. Literature data is listed for

The bioavailability of chromium depends largely on the state in which it exists. Free chromium compounds dissolved in water can be readily absorbed by water organisms that in the first instance have no access to sediment-associated chromium. The latter however can be collected by sediment organisms. Plants can absorb chromium(III) and chromium(VI) from soil to differing degrees, depending on plant species as well as the type of soil.

In plants, animals, and humans, small amounts of chromium(III), but not chromium(VI), exist. Chromium(III) is part of some proteins such as the glucose tolerance factor (GTF). The natural requirement of a person for chromium(III) is covered by a balanced diet without affording any additional supply. In Germany, the typical total chromium content in surface waters is 2.5 micrograms per liter. From this, 2 micrograms are particle-bound and 0.5 micrograms are dissolved. These and the following statements regarding environmental behavior and ecotoxicological properties of chromium compounds are taken from [1], if no other source is mentioned. If higher concentrations of chromium are found in surface waters, their occurrence is usually due to man-made production and usage of chromium compounds.

If chromium(III) or chromium(VI) compounds are released to the environment, they can be subject to changes in oxidation number and to adsorption processes. Both are equilibrium reactions. Here, the predominant environmental conditions determine which process direction is in favor. An overview is given in Figure 2.

For simplifying, the following two cases may be differentiated:

In wastewater treatment as well, boundary conditions determine the oxidation state of chromium:

Compounds of hexavalent chromium are highly toxic for water organisms and can cause considerable longterm damage in waters. Therefore, these substances are assigned risk phrase combination R50/53. Effects of hexavalent chromium on animals and plants have been studied extensively. Table 1 lists results of studies on algae and higher forms of aquatic plant life. The table denotes the concentrations at which, in the experiments, no effect could be observed (NOEC values: no observed effect concentrations). For algae and higher water plants, these values are in the range of ten to 500 micrograms per liter. The example of the two species of duckweed shows that closely related organisms can differ significantly in terms of their sensitivity towards chromium(VI). The studies showed a factor of five between the sensitivities for the two species. 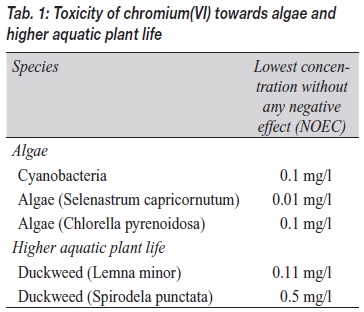 Table 2 shows results from studies of the toxicity of chromium(VI) towards crabs and coelenterates. The range of concentrations without any effect is between five micrograms per liter and one milligram per liter. The sensitivity of closely related species can differ by a factor of 30.

Finally, Table 3 shows results of studies on selected species of fish. The range for concentrations without any negative effect is 10 micrograms per liter to 3.5 milligrams per liter. Species examined differ with respect to their individual sensitivity – brook trouts are 300 times more sensitive than guppies. The studies that provide these data are also the basis for deriving so-called PNEC (predicted no-effect concentrations). Such maximum permissible (threshold) values indicate concentrations from which no negative effect is expected for the environment. They are listed in REACh as safety values in quantitative exposure assessments and risk analyses. 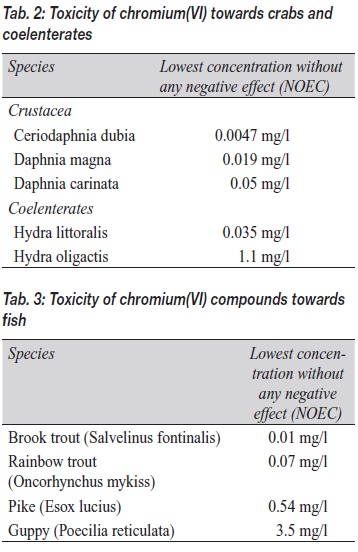 For chromium(VI) compounds, the European risk assessment system has specified a PNEC value of 3.4 micrograms per liter for aquatic environments.

Due to their high toxicity towards animal and plant life, handling of chromium(VI) compounds calls for extensive risk management measures. This is an even more critical issue when it comes to human health protection (which, however, is not subject of this article).

Because of REACh, the new European chemicals legislation, a registration of chromium(VI) compounds requires chemical safety assessments (regardless of any possible restriction of usage of these compounds in the realm of approval due to the particularly pronounced hazardous nature of the substances). Applications of such compounds are required to be safe, i.e., with a focus on environmental issues, the existing exposition in water is to be kept below the PNEC value mentioned above. Since this is in the lowmicrogram-per-liter range, correspondingly effective risk management measures need to be applied.

In the realm of a research project named RUH, the German Federal Environment Agency in cooperation with the ZVO (the central association for surface technology in Germany) developed exposure scenarios for inorganic metal compounds. Results of this project are published in [3]. When chromium electrolytes are used, a multistage partial-flow treatment for wastewater is required which is individually customized to the substances treated. In a first step, chromium(VI) is reduced by adding sodium hydrogen sulfite (NNaHSO3) at pH levels below 2.5. The second step introduces calcium hydroxide to increase the pH and to precipitate chromium(III) as chromium(III) hydroxide.

For chromium, as well as for many other types of metal, possible environmental impact (and human health risks) is determined by a set of conditions:

In the environment, chromium is stable at a number of inter-convertible oxidation stages. Many boundary conditions (pH value, hardness, reducing agents, ligands, i.e., compounds that may lead to formation of complexes with chromium) determine the behavior of chromium(VI) in the environment.

Soluble chromium(VI) compounds are highly toxic towards plant life and animal life (including humans). Environmental compliance regarding safety values (PNEC values) calls for very effective risk management measures. Corresponding strategies apply likewise and even more when safeguarding the health of employees working with chromium(VI) compounds is discussed (Effects of chromium(VI) compounds on human health are not subject of this work. However, much information on this topic is provided in [1]).

For a number of technical processes, some users notice that coatings produced by utilizing chromium(VI) compounds feature characteristics that nowadays are difficult or even impossible to achieve using substitute materials. Thus, in the past decades, significant technical measures have been developed in electroplating technology in order to reduce wastewater contamination as far as possible or to run systems that are completely wastewater-free [4]. At the same time, surveys of chromium(VI) processing enterprises in Europe showed that not in all cases the best available technologies are used, and thus, environmental release of chromium(VI) compounds does occur [1]. Wherever possible, chromium(VI) compounds should therefore be replaced by less harmful substitutes.