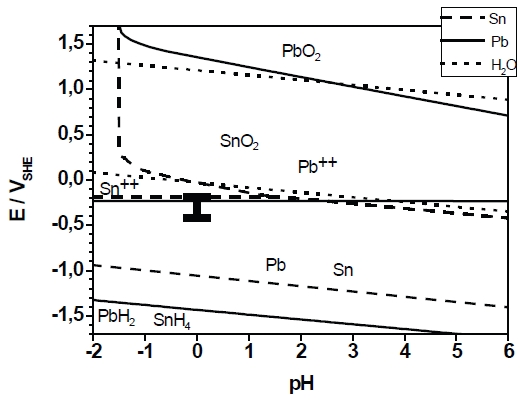 The present study investigated the formation of a binary alloy of lead and tin. Both elements represent a thermodynamic system with strongly limited miscibility in solid state. The deposition of the layers was carried out under potentiostatic conditions at various deposition potentials from a sulfonate-based electrolyte. The layer formation was characterized by electrochemical techniques (cyclovoltammetry, chronoamperometry). The microstructure development was investigated by SEM/EDX measurements and X-ray diffraction. The layer formation is compliant with the Stranski-Krastanov growth mode. The current efficiency of the deposition was approximately 100%. According to the thermodynamic theory the layers show a dual-phase microstructure. The composition of the Pb-Sn layers was depending on the deposition potential. Supersaturated α-Pb-solid solution could not be observed. The morphology is also strongly depending on the deposition potential. The diffusion coefficient of the metal ions in the sulfonat-based electrolyte was measured by rotating disc electrode experiments. The formal diffusion coefficient in the electrolyte containing Pb2+– and Sn2+– ions is close to the diffusion coefficient of lead ions.