Hydroxyapatite has received much attention and has been clinically applied in orthopaedics and dentistry due to its excellent biocompatibility. Hydroxyapatite (Ca10(PO4)6(OH)2), HAP, constitutes about 70 percent of natural human bone. HAP is osteoconductive and accelerates bone growth as well as attachment to the surface of implants. In addition, HAP improves fixation and lifetime of implants. Although mechanical strength is too poor for being used in load-bearing applications, HAP coatings on bioinert metallic prostheses were investigated to improve mechanical properties while maintaining biocompatibility [1–5]. Several methods for depositing HAP onto implant surfaces have been reported, for example, plasma spraying [5–9], sputtering [10–12], pulsed-laser deposition [13], sol-gel [14], electrophoresis [15], and electrochemical deposition [16–18].

Strontium, with a charge-to-size ratio similar to that of calcium, can readily substitute calcium in the lattice of HAP at any proportion. In some cases, substitution of Ca by Sr is reasonable as it plays an important role in treating osteoporosis and enhancing bone remineralisation since Sr is associated with a reduction of bone resorption, an increase in the formation of new bone, and a decrease in the risk of bone fracture [19]. Consequently, a number of Sr-containing materials have been tested as bone fillers, such as partially strontium-substituted hydroxyapatite Srx–HAP [20–23], tri-calcium phosphate [24] and CaSiO3 [25], as well as strontium-containing cement [26, 27]. In addition, strontium-containing toothpaste has been developed for enhancing remineralization of dental enamel [28], and recently, drugs such as strontium ranelate (SrR) [29] were suggested for use as a daily supplement to increase bone mineral density.

By soaking in sodium hydroxide solution at 80 °C, brushite (CaHPO4·2H2O) coatings are easily converted into HAP coatings. Brushite can be deposited electrochemically by applying current densities between 0.375 mA/cm2 and 6 mA/cm2 [18, 30–33]. Specifications of HAP coatings (Tab. 1) are found in the Food and Drug Administration guidelines as well as in ISO standards [6, 34, 35].

The coatings discussed here were electrocrystallized to form brushite with a subsequent treatment in sodium hydroxide solution to form HAP. Maintaining a constant (Ca+Sr)/P ratio of 1.67, selected volume ratios of SrCl2/CaCl2+SrCl2 were used to substitute calcium with strontium. The main objective of this research was to study the effects of this substitution on the formed calcium phosphate phase(s) as well as the coating properties. To our knowledge, no data are available on partially strontium-substituted hydroxyapatite coatings on titanium alloy substrates.

A single-compartment electrochemical cell was used for electrocrystallization. Titanium sheets served as cathodes and were cut into disks of 50 mm × 20 mm and a thickness of 0.8 mm. After cutting, the specimens were homogeneously grinded with 600 grit SiC abrasive paper and etched at room temperature for five minutes. The etching solution consisted of 180 ml/l nitric acid (65 %) and 23 ml/l hydrofluoric acid (42 %) in bi-distilled water. After rinsing with distilled water and ultrasonic cleaning with acetone for five minutes, the specimens were carefully airdried and weighed. A platinum sheet of 4 cm2 served as anode. It was ultrasonically cleaned in acetone prior to use. A saturated calomel electrode (SCE) was used as reference electrode along with a potentiostat/galvanostat instrument for electrochemical measurements.

The electrolyte solution used for the electrocrystallization was prepared from three stock solutions: 0.167 M CaCl2, 0.167 M SrCl2, and 0.1 M NH4H2PO4. Different volumes of CaCl2 and SrCl2 were mixed with a constant volume of NH4H2PO4 by magnetic stirring for a total volume of 300 ml with constant (Ca+Sr)/P ratio of 1.67 in the mixed solution (Tab. 2). The pH value ranged from 4.2 to 4.6. Temperature was kept constant at (25±1) °C. Deposition was carried out galvanostatically for one hour at a current density of 1.5 mA/cm2. After coating, specimens were rinsed in bi-distilled water in order to remove residual electrolyte, then sprayed with ethanol, air-dried, and weighed to evaluate weight gain.

Samples were characterized as-deposited and after conversion to HAP. For conversion, the layers were soaked in 1 M NaOH solution for 60 min at 80 to 90 °C. Subsequently, the specimens were rinsed in water and ethanol, air-dried, and weighed to evaluate weight loss.

Crystalline phases of the specimens were examined by X-ray diffraction (XRD, D5000, Siemens) with monochromatic Cu Kα radiation (λ = 0.154052 nm). The current and voltage of the X-ray tube were 15 mA and 40 kV, respectively. Scanning angles of specimens varied from 10° to 70°. Crystallite size was computed applying Scherrer’s equation. Coating morphology and microstructure were investigated by scanning electron microscopy (NEON 40EsB, Zeiss). In addition, elemental composition was determined by energy-dispersive X-ray spectrometry (EDXS, EDAX). Cross-sections were embedded in epoxy prior to cutting, grinding, and polishing to protect the porous brittle layer during preparation.

Crystallization of dicalcium phosphate dihydrate, for example, can be a combination of the following reactions:

The effect of Sr substitution was studied on as-deposited layers and layers after the conversion to HAP. For this, different amounts (0 to 100 volume percent) of CaCl2 were substituted by SrCl2 at constant (Ca+Sr)/P ratio and constant deposition conditions (Tab. 2). Obtained weight gains are given in Table 3, compositions of the coatings in Figure 1. A slight decrease in weight gain was observed with increasing substitution of Ca by Sr. Considering the significant difference in atomic weight between Ca (40.08) and Sr (87.62), strontium remarkably hinders electrocrystallization of Ca phosphate and/or Sr phosphate phases. This is confirmed by the striking decrease of layer thickness with increasing Sr content. 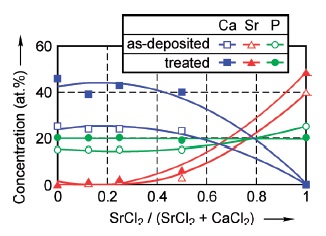 Despite these deviations, Sr content in the coating rises as expected with increasing SrCl2 in the electrolyte, Ca content decreases and P content remains nearly constant. A notable incorporation of strontium into the HAP coatings was confirmed by EDXS and XRD for a SrCl2/(SrCl2+CaCl2) ratio of 0.5.

As-deposited brushite and strontium hydrogen phosphate layers as well as the converted layers were characterized using XRD, SEM, and EDXS. Crystallite sizes for as-deposited and converted layers derived from XRD results are given in Figure 2. The crystallite size of the as-deposited layers decreases with increasing Sr concentration. Due to the conversion treatment, the crystallite size of the hydroxyapatite layers drops remarkably but remains nearly constant for a SrCl2/(SrCl2+CaCl2) ratio up to 0.5. The change after conversion of layers with complete substitution of Ca by Sr is relatively small. The crystalline phase is confirmed as HAP except for complete substitution, in this case the formed phase is strontium hydroxyapatite. 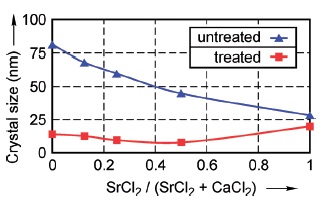 Figure 3 shows SEM images of cross-sections of Sr-containing electrocrystallized calcium phosphate dihydrate layers on titanium substrates. The nanometer-sized crystals form flat crystal aggregates growing on the substrate surface in randomly inclined stacks. With increasing Sr content, packing density of the crystal aggregates seems increased. This is confirmed by SEM images of the coating surfaces (Fig. 4). The plate-like crystal aggregates are stacked together and show good bonding to the surface of the titanium substrate. At high Sr substitution, the stacks of crystal aggregates appear to be reduced in size and to be arranged more densely. This is confirmed by the surface appearance of the converted HAP coatings which seems to be unchanged by the soaking treatment (Fig. 5). 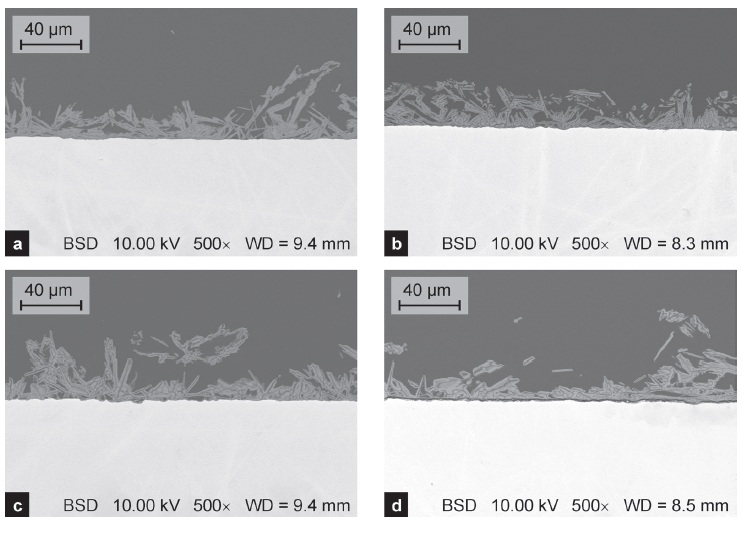 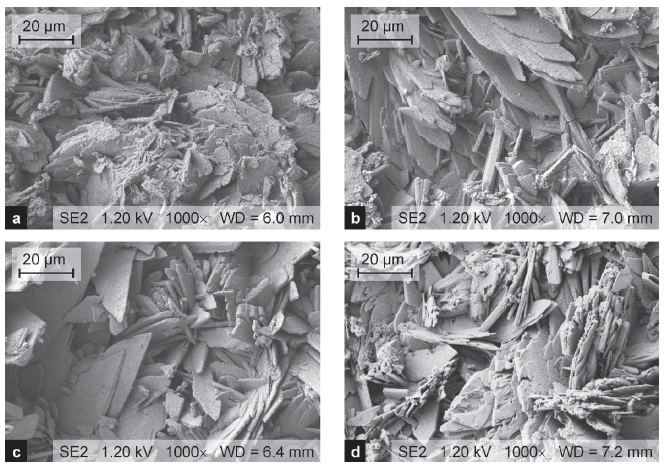 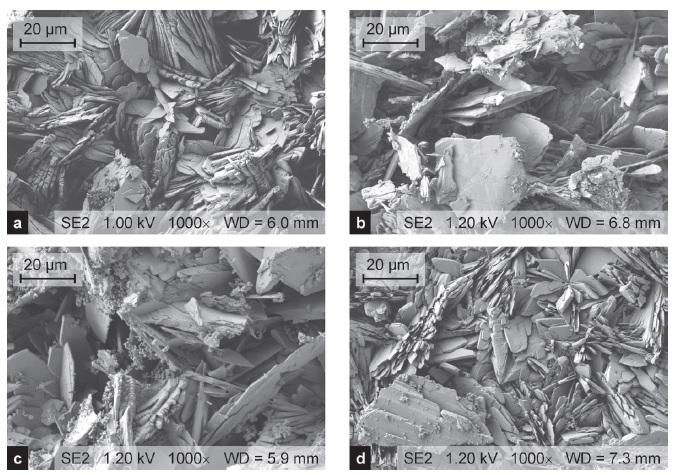 At complete Sr substitution, strontium hydrogen phosphate crystals form needle-like aggregates which are arranged in clusters and flower-like formations (Fig. 6a). Transformation to strontium hydroxyapatite decreases the size of the crystal aggregates (Fig. 6b).

Mechanical properties of the deposited layers can hardly be evaluated due to the brittleness of the material. However, influence on the friction coefficient can be studied (Fig. 7). Obtained results show that the friction coefficient (μ) is increased at low SrCl2/(SrCl2+CaCl2) ratios (up to 0.25) and decreased at high SrCl2/(SrCl2+CaCl2) ratios (above 0.5). This is in good correlation with the denser and finer-grained microstructure of the layers. 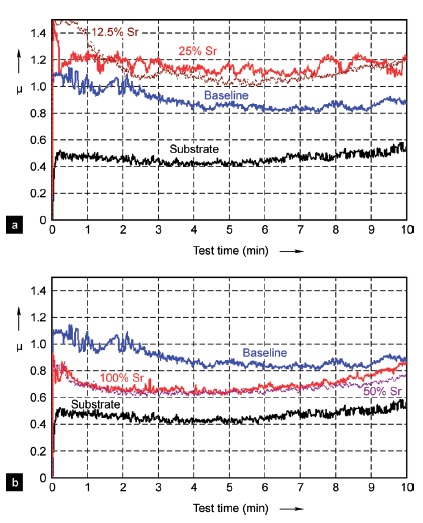 Fig. 7: Friction coefficient of hydroxyapatite at low (a) and high (b) Sr substitution compared to unsubstituted calcium hydroxyapatite (baseline) and uncoated titanium

Strontium hydrogen phosphate was electrocrystallized by electrochemical deposition and converted to strontium hydroxyapatite. Brushite and strontium hydrogen phosphate were co-electrocrystallized on titanium substrates. The morphology of as-deposited layers is characterized by plate-like crystals of brushite. Calcium-free layers are composed of acicular aggregates. The effect of calcium substitution by strontium on the composition of the as-deposited and converted layers was confirmed by EDX. The crystallite size of brushite is decreased with increasing substitution by Sr and by conversion to hydroxyapatite. High Sr-substituted hydroxyapatite shows a reduced friction coefficient, compared to calcium hydroxyapatite.