After having reached the 65th year of life in 2005, Prof. Dr. Siegfried Steinhäuser officially was officially retiring – but as adherent of TU Chemnitz he continues to work on his subject area (materials science) and engages i.a. in China. In September 2013 Prof. Steinhäuser was now honored with the Friendship Prize awarded by the Governor of Jiangsu Province, Mao Weiming, in the capital Nanjing. Jiangsu Province with its 80 million inhabitants counts among the most prospering provinces in China. Within a solemn act also other outstanding personalities from industry and academia, i.a. from Canada, India and Sweden, were honored.

“On June 2005 the Senior Expert Service SES was asking me if I was interested in working within a project in China. This project was dealing with the topic of corrosion prevention of cooling and ventilation systems at a company located at Penglai/ Yantai at Shandong Province” Prof. Steinhäuser tells. The Senior Expert Service (SES) is a non-profit corporation operated by the Foundation of German Industry for International Cooperation. This organization sends retired specialists and managers to provide voluntarily help for self-help world-wide. “TU Chemnitz is supporting my activities and will do so also in the future. My special thanks go to the professors Thomas Wielage and Thomas Lampke” Steinhäuser says. 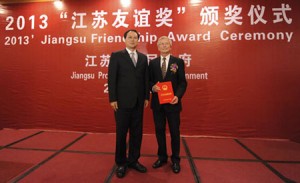 The contact to Jiangsu Province, where Prof. Steinhäuser was honored actually, was established in August 2010: On behalf of SES Prof. Steinhäuser worked in the company Jiangsu Jiangqiao Painting Engineering Co. Ltd. at Yancheng/ Yandu. His task was to consult the company with regard to the construction of painting systems and to impart knowledge to technical staff members especially concerning material and surface technological aspects. “In addition I support the establishment of a materials engineering laboratory which is dedicated to industrial applications as well as to research in cooperation with Yancheng University” says Prof. Steinhäuser and adds: “In this context I was also able to establish contacts to German companies like the company Dürr.”

Within a solemn act also other outstanding personalities from industry and academia, i.a. from Canada, India and Sweden, were honored

The owner of the company Jiangsu Jiangqiao Painting Engineering Co. Ltd. is at the same time Vice-President of the Chamber of Industry and Commerce at Yancheng and thanks to that Prof. Steinhäuser was getting into contact with a variety of different personalities of this city of 8 million inhabitants. “The Mayor and other public officials as well as the local industry expressed their willingness to establish closer relations to Chemnitz and other cities in Saxony in the areas of administration, science and economy” tells Prof. Steinhäuser. As Chemnitz is already maintaining a partnership with Taiyuan in Shanxi Province and as at that time there was no real interest in establishing another partnership, there were relations established between Prof. Steinhäuser and representatives of the city of Yancheng/ Yandu on the one hand and the Zwickau Regional Chamber of the Chamber of Industry and Commerce as well as the Mayor of Zwickau, Dr. Pia Findeisen, on the other. In August 2013 a partnership was finally concluded between Yandu, a district of the sub-provincial city Yancheng, and Zwickau. Since then Prof. Steinhäuser was several times at Yancheng, he assisted already two delegations of the Chinese city in Zwickau together with the Chamber of Industry and Commerce as well as on the occasion of an economic tour through Germany and he knows already to tell about first industrial contacts.