Doctor of Science, Professor, Head of the Department of Electrochemical Engineering of the Mendeleyev University of Chemical Technology

Vladimir Kudryavtsev was born in Moscow on May 24, 1935 in an academic family. His father , Nikolay T Kudryavtsev, Dr. Sci. Professor was a prominent scientist in the field of electrochemical engineering, especially in electroplating , and at that time he was a Head of the Department of Electrochemical Engineering at the Mendeleyev Institute of Chemical Technology (now – Mendeleyev University). His experience, close cooperation with soviet plating industries turned to be powerful attraction for his son and for his choice of his future.

After the graduation in 1958 Vladimir Kudryavtsev started his career at the Institute of Physical Chemistry of the Soviet Academy of Science as a junior researcher under the supervision of Professor, Dr. Ashot T. Vagramyan. 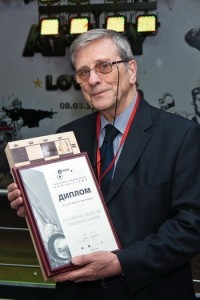 Dr. Vagramyan suggested his young pupil tu study the process of hydrogenation of metals – a problem of high practical importance that time. A final goal of this research was to work out practical measures to prevent hydrogenation and to avoid in this way its inevitable consequences – brittleness of metals and alloys. It took long time and much experimental work and became a major area of Vladimir’s activity. Finally, it became a basis of his thesis for a degree of a Dr. Sci.

He has established a mechanism of the penetration of hydrogen into the base metal – different types of steel in the course of the plating process, the effects of the bath composition and operating conditions, heat treatment of plated parts. It was shown in his experiments that hydrogen is incorporated not only in the base metal, but also into the coating and can later diffuse from it into the base metal causing the hydrogenation of the latter. On the basis of these research methods preventing this dangerous situation have been worked out and were put into industrial practice, in particular in airspace industry and related branches.

In 1972, after the death of Dr. Ashot Vagramyan , Vladimir Kudryavtsev was elected as a Head of Dr. Vagramyan’s laboratory, and his own research since that time was closely related with the process of chromium plating and resulted finally in the development of a new process for the electrodeposition of hard chromium coatings with high wear resistance. This process is now used in many plating shops in Russia and other countries. In his laboratory and under his leadership a new method for the analysis of organic additives in chromium plating solutions has been developed. This method and a device based on it are now used in the plating shops in Russia and other countries.

In 1986 Dr. Vladimir Kudryavtsev got a proposal to take a position of a Head of the Dept. of Electrochemical Engineering at the Mendeleyev University. Since that time he concentrated his efforts on the improvement of the teaching process, delivered lectures on himself electroplating, payed a lot of time to post-graduate students and specialists from numerous plating shops from all parts of Russia who came to Moscow to improve their professional qualifications. For this particular purpose he has organized special training courses at the University. For the last three and a half years specialists from 270 plating works have been trained at these courses.

And finally, his invaluable contribution to our common course has been realized in the creation of the professional journal, professional web-site and Russian Electroplater’s Society – all the very first ones in our country.

Vladimir Kudryavtsev was an active member of numerous institutions and societies, editorial boards, etc.: Transactions IMF, Protection of Metals, Mendeleyev Chemical Society, Russian Academy of Natural Sciences, ISE, AESF, European Academy. He is a holder of several national and international awards. He was considered as well-known authority in all aspects of electroplating always providing his assistance whenever requested. His numerous pupils, colleagues and friends will remember him as a charming personality, talented teacher and prominent scientist.