The authors report on the cell toxicity study of a nanoparticle containing chromium(III) passivation. The toxicity of abrasion from zinc plated and nano-passivated screws was tested with human A549 cells. As a reference system we used the abrasion from zinc plated and thick layer passivated screws. The tests showed no toxic potential of the nanoparticle-containing passivation layer, as can be seen by the normal growing behavior of the cells in presence of the abrasion.

Tiny particles are promising candidates for the industry, since on the nanometer scale – one nanometer is the millionth part of a millimeter, thus about 50,000 times smaller than the diameter of a human hair – materials show new properties.

Titanium dioxide particles with a diameter of approximately 5 micron are used as white pigment since decades [1]. Nanostructured deposited metals may have a significant higher wear resistance. Since about 10 years nano-diamants are co-deposited in contact layers like gold in order to improve the abrasion properties [2]. Carbon nanotubes and so-called buckyballs (fullerenes) can be industrially produced and have already been put into use in some fields of application [3].

Nanoparticles are also used in the modern metal surface treatment, e.g. in passivations and top coats [4, 5]. They are structuring element of the layer to optimize mechanical properties such as scratch resistance or influence the behaviour of the layer after humidity or pH change of the ambiance. The used nanoparticles are silica particles with a typical diameter of 5 to 50 nanometer.

For some time there is a public discussion about the not well known risks of nanoparticles [6-9]. Also the plating industry has to face this problem and contribute to the discussion with respect to their specific products and processes. For evaluating the true hazardous potential of a substance both factors, toxicity and exposition have to be taken into account. Thus, a general statement, especially in case of normally non-toxic chemicals like silicon dioxide, is not possible.

In cooperation with the Fraunhofer Institute for Interfacial Engineering and Biotechnology a toxicity study regarding the hazard potential of silica nanoparticles in the nanopassivation Lanthane TR 175 has been conducted. First the structure of the passivate layer was investigated to get information about the existence of isolated particles. Then, in the toxicity study itself, the mechanical abrasion of a nanopassivation was brought in contact with human lung cells as a worst case scenario.

To judge the risk potential of nanoparticles which are embedded into passivation layers, first a microstructure analysis was performed. Since the chemical composition (SiO2) of the used silicon dioxid particles is non-toxic, it can be assumed that a potential biological activity of nanoparticles depends on the state of the particles within the layer.

In earlier studies it was shown by depth profile analysis, that silicon (and also the SiO2 particles) is enriched in the upper part of the passivation layer [4]. A more detailed constitution of the layer could not be obtained, because of lacking resolution of SEM analysis [4, 5]. In order to map the silica particles, which have – according to the supplier – a diameter of about 5 nm, a zinc plated and nano-passivated panel was investigated with TEM (transmission electron microscopy).

The panel was electrogalvanized by an alkaline zinc process (Primion 240, Coventya GmbH) and nanopassivated (Lanthane TR 175, Coventya GmbH). Afterwards the panel was cut and glued to a sandwich, again cut and finally grinded, polished and ion etched (argon plasma), so that a very thin only few nanometer thick electron transparent area is formed in the middle of the sample. The single steps of the sample preparation are shown in Figure 1.

Fig. 1: Preparation of a sample for the TEM-cross section analysis; build up of the sandwich in the optical microscope (right)

A TEM image of the so prepared sample is shown in Figure 2. A Philips CM 200 Super Twin, 200 kV, microscope was used for the made examination. One can see the approximately 200 nm thick passivation layer, which consists of a less dense (brighter) conversion layer direct on top of the microcrystalline zinc layer and a subsequent uniform darker area. Only very few particles can be detected. They are identified as the used silica nanoparticles by their size. Especially in the upper area of the dark layer where most silicon was found by Nanospot-EDX (spotsize: 20 nm) in conformity with the former mentioned depth profile analysis a compact layer is formed which contains the particles presumably in a continuous matrix. 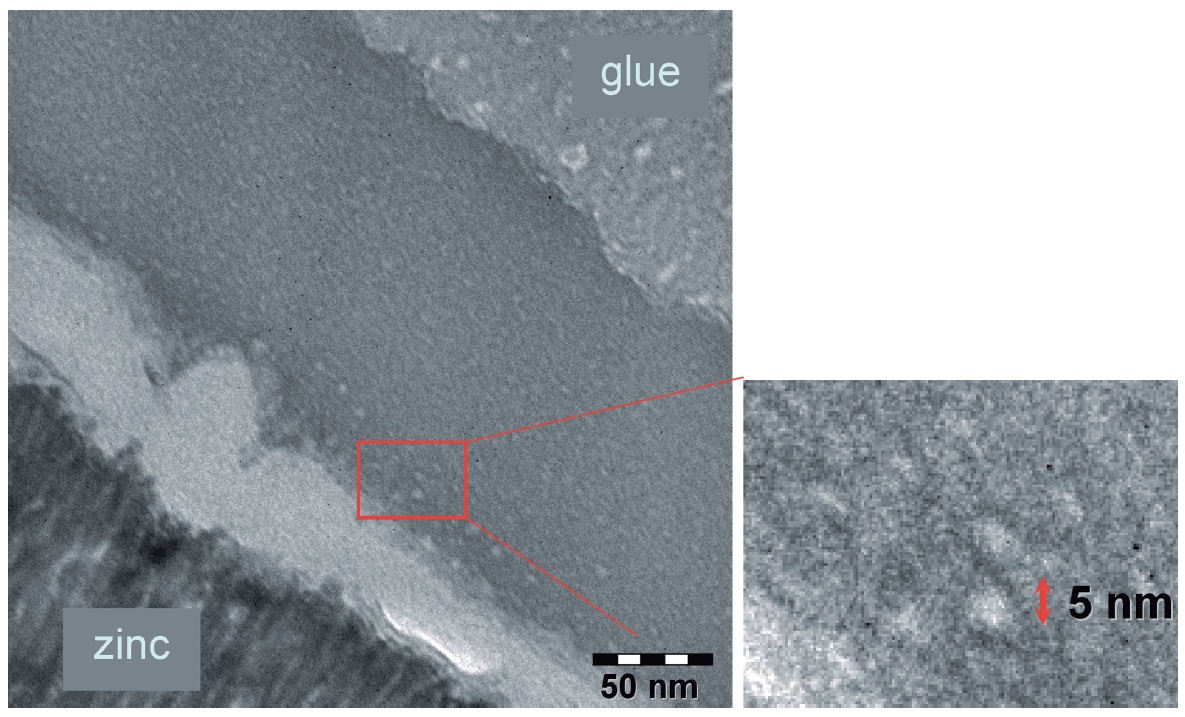 As mentioned in the introduction and confirmed by the microstructural study the only scenario which could (as a worst case) lead to a significant nanoparticle exposition caused by nano-passivated surfaces is the mechanical abrasion of the coated surfaces. The abrasion can be formed e.g. by conveying systems at the manufacturing companies or by mechanical forces at the end customer. Such samples were therefore used for the cytotoxicity tests described below.

To create the abrasion screws (ABC-Spax S-TORX 3.0 × 30) are electrogalvanized by alkaline zinc process and nano-passivated (Primion 240 / Lanthane TR 175). 250 g of the screws were filled into a PE bottle and shaked for 60 minutes on a plate shaker (IKA KS 260) at maximum level (Fig. 3). The created abrasion is washed off the screws and the bottle to obtain a suspension of the abraded material in water.

Fig. 3: Microscope image of an elektrogalvanized and nano-passivated screws before (left) and after 60 min shaking. It is shown the shank above the thread

With the resulting suspension a cytotoxicity test was performed with lung cells (cell line A549), which were initiated by G. J. Giard from a 58 years old male Caucasian. The suspension was first transferred into a physiological buffer (PBS) (called stock solution). Chemical analysis of the stock solution shows that the abrasion, besides the passivation components, also contains large amounts of zinc from the galvanized layer and some iron from the base material (Tab. 1). Since the cobalt and silicon concentrations were below the lower detection limit of the AAS device, the theoretical value was calculated from the chromium concentration and the concentrations in the completely dissolved passivation layer (called layer weight per screw).

For the toxicity tests [10] different concentrations (halving the concentration with each step) of the abrasion containing stock solution were put onto cell culture plates in a growing medium together with a suspension of the lung cells (Fig. 4). Transparent, surface modified polystyrene 96 well BDFalcon microplates for adherent growing cell lines are used as cell culture plates. 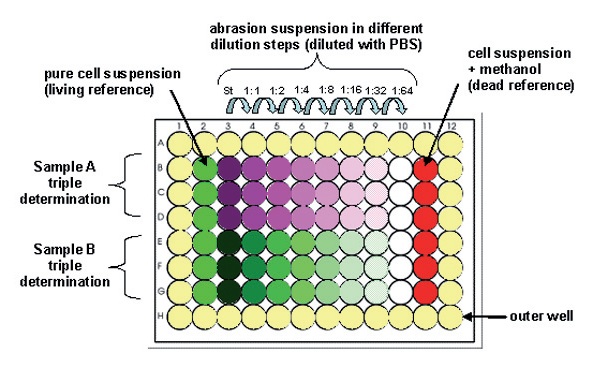 Besides the described nano-passivated screws thick layer passivated, non-passivated, and non-galvanized screws were tested as reference samples to take other influences than silica nanoparticles into account. Furthermore diluted passivation solution and pure silica particle suspension were tested (Fig. 5). Within each test series one part of the cells is incubated with pure growing medium (living reference) and another part is killed with methanol (dead reference).

Fig. 5: Microscope image of a well with lung cells and abrasion from nano-passivated screws (right: reference without lung cells)

After incubation the supernatant was removed and the wells were filled with a fluoresceine diacetate (FDA, Sigma-Aldrich) containing solution. Vital cells metabolize FDA to fluoresceine, which can be detected by fluorescence measurement (TECAN Spectrafluor Plus, excitation wavelength: λex = 485 nm, emission wavelength λem = 538 nm). This FDA method is a well known, often applied method for vitality control [10].

Figure 7 exemplarily shows the diagram for the fluorescence measurement of two samples. All Vx-1 values in this diagram and also the Vx-1 values of all other measured samples (both of the nano-passivation and of the thick layer passivation) are in the range of the method’s uncertainty (+0.1 to -0.1). The reference samples show the same behavior. 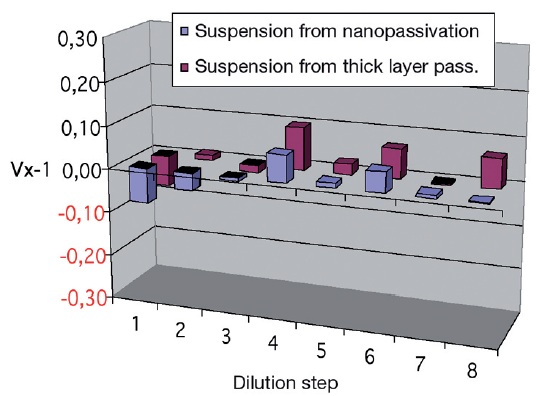 Small (Ø 1 to 10 nm) charge stabilized silica nanoparticles prepared by sol-gel synthesis as used in passivations can be regarded as harmless according to the current state of knowledge. The toxicity tests of the nanoparticle-containing passivation with human A549 cells show no toxic potential, as can be shown by the normal growing behavior of the cells in presence of the nanoparticles. The results also show the suitability of the test system. Further studies after this method with other layers, e.g. with nanoparticle containing top coats are currently running.

The TEM-studies were realized at the University of Duisburg-Essen “Lehrstuhl für Werkstofftechnik“ and the University of Bielefeld „Fakultät für Physik“.
The cytotoxicity study was accomplished at Fraunhofer Institute for Interfacial Engineering and Biotechnology in Stuttgart.